Quotes from here or elsewhere in Simply Scheme unless otherwise specified. Refers to “the book” or “SS’ are to Simply Scheme.

' is actually short for quote. Given that, you can’t use ' as an ordinary punctuation mark in a sentence (at least without putting the word in double-quote marks, which the book mentions in a footnote).

Selectors are things that let you take apart words and sentences. Stuff like first, last, butfirst, and butlast.

We can use these primitive selectors to define other selectors like second.

We can also use item to directly select any arbitrary letter in a word or word in a sentence.

The book notes that sentences containing exactly one word are different than a word itself. Because selectors operate on words at a character-level and sentences on a word level, this leads to different behaviors:

The book notes that sometimes butfirst will return a word with double-quotes around it, for example:

This indicates that the number is not being displayed in its normal form (as a number) but as a string – as a series of characters that you can chop up with selectors just like you can with the words “apple” or “potato”. Such a chopping up is in fact what happened here, with butfirst returning all but the first character of 1024.

bf and bl are abbreviations for butfirst and butlast respectively.

The book asks of the following example:

By the way, why did we have to quote makes in the last example, but not 2? It’s because numbers are self-evaluating, as we said in Chapter 3. We have to quote makes because otherwise Scheme would look for something named makes instead of using the word itself. But numbers can’t be the names of things; they represent themselves. (In fact, you could quote the 2 and it wouldn’t make any difference-do you see why?)

In chapter 3 the book said:

It’s easy to understand an expression that just contains one number. Numbers are self-evaluating; that is, when you evaluate a number, you just get the same number back.

My attempt to think this through:

With words (or even just a letter) there is the possibility oft the word being used to evaluate something else, like with first. So if you want to return just the word “first”, and not invoke the procedure first, you have to give Scheme that information somehow (such as by using quote or the abbreviation ').

With numbers there is no such ambiguity. Numbers are an end in themselves – they always return themselves. They can never be used as something which evaluates something else. I actually tried to define a procedure 5 that would take a number and add 5, just as a test, and got back an error:

SS gives some computing history and comparison to other languages. SS notes that other languages often treat sentences as being merely a collection of characters. Historically, computers dealt with just numbers. Instructions in the computer’s native machine language dealt with numbers, so programmers developed an attitude that numbers are the “real things” that computers deal with. Computers represent text characters as numbers, so in many programming languages individual characters are the “real things” but words or sentences are just collections of characters.

Scheme treats sentences as first-class data. The book authors believe that programming languages should let you express ideas in terms that match your thinking, and that seems reasonable. Sentences being first class data “means that a sentence, for example, can be an argument to a procedure; it can be the value returned by a procedure; we can give it a name; and we can build aggregates whose elements are sentences.”

Things Not to Do

Things that are okay to use in words and sentences: question marks and exclamation points.

Be careful not to use word and sentence as formal parameters. If you do so, you won’t be able to use the corresponding procedures for those terms in your definition:

The result of substitution was not, as you might think,

When you provide the argument george to your plural function, it substitutes george in for every instance of word. You only intended the argument to be substituted in for the second instance of word and wanted the first instance to be the procedure word, but Scheme doesn’t know that, so your program doesn’t work. The book says:

We’ve been using wd and sent as formal parameters instead of word and sentence, and we recommend that practice.

This seems connected to the idea of sentences being considered first class in Scheme. Since sentences are able to be dealt with as an object, they can have their own sentence-level attributes, like a count that consists of something besides just the number of characters that the sentence consists of.

SS says not to worry if sometimes your procedure has quote-marks around it.

I predict that this will print…

…on the theory that since the first argument is an empty sentence, it’s basically a nullity and will get ignored by sentence when doing the combination.

Yep, I was right. 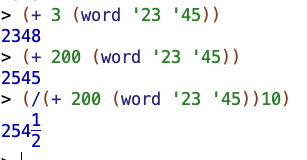 If I just type in 'apple it returns with a ' in front. If I use word on two words:

then I get back 'potatotomato. But numbers lack the ' in front. Interesting.

I guess that this will print "".

I guess that this will print '()

❌ ERRONEOUS, SEE CORRECTION BELOW: This is similar to an example in the book. first should return a one-word long sentence consisting of the first word of (maggie mae), namely, (maggie). count should treat the value returned from first as a sentence and thus count the number of words that make up that sentence (only one word in this case). so the value of the whole expression should be 1.

✅ CORRECTION: Ok so I had a misconception here. Earlier in my notes I actually have a relevant example:

So first actually does “reach into” the sentence to pluck out a word. So does last by the way:

I think this all makes sense. first basically gives you a specific location to go to (the first location in a sentence) to find a word to grab. butfirst says to grab everything but that first word, including the “sentence bag” that the words are in (my own very sophisticated analogy 😉 ). And if there’s only one on something you do butfirst on, you disregard that one word but still grab the “sentence bag”.

Sentences are first class objects in Scheme, but you can still absolutely look “inside them” and pull stuff out if that’s what you want to do. And that’s what first does. So the actual count for this example is 6, because count is counting up the number of characters in the word “maggie”.

I think this will return a single empty list '() cuz it’s just joining a bunch of empty stuff together. (I figure that the “” are empty strings)

The double quotes were joined together in a sentence.

Based on the return from the last example, I guess that this will return 5 – one for each double quote in the sentence plus one for the space in between.

Whoops. I think cuz this sentence was kind of weird, I thought of the count in terms of characters of a word instead of parts of a sentence. The answer makes sense to me though – I guess it’s counting each empty string as a part of the sentence.

For each of the following examples, write a procedure of two arguments that, when applied to the sample arguments, returns the sample result. Your procedures may not include any quoted data.

I solved this one two ways:

Explain the difference in meaning between (first 'mezzanine) and (first '(mezzanine)).

Explain the difference between the two expressions (first (square 7)) and (first '(square 7)).

(first '(square 7)) says to return the first word of a two-word sentence (square 7), which is square.

Explain the difference between (bf 'zabadak) and (butfirst 'zabadak).

These have the same meaning – bf is just an abbreviation for butfirst.

Explain the difference between (bf 'x) and (butfirst '(x)).

Which of the following are legal Scheme sentences?

Figure out what values each of the following will return before you try them on the computer:

This returns a sentence made up of two words, (matt wright).

This returns a sentence made up of two words, (brian harvey).

What kinds of argument can you give butfirst so that it returns a word? A sentence?

What kinds of argument can you give last so that it returns a word? A sentence?

last will return as sentence if you give it a nested sentence, as in:

Which of the functions first, last, butfirst, and butlast can return an empty word? For what arguments? What about returning an empty sentence?

If you try to give last or first an empty sentence, it gives an error on my Scheme.

What does ' 'banana stand for?

If I enter this into Scheme I get the following:

It looks to me like the space is ignored, so the result is a word. My first guess was maybe that it stands for a 7 character word – banana preceded by a ' being treated as just a character. In light of the below, I think it may actually stand for a word quotebanana, and ' is just representing that in abbreviated form. Not sure.

If you put a stray ' anywhere else in a word other than as the first character, you’d get an error. But maybe if the ' literally follows the first ' then that escapes the second ' somehow, not sure.

Write a procedure third that selects the third letter of a word (or the third word of a sentence).

Write a procedure first-two that takes a word as its argument, returning a two-letter word containing the first two letters of the argument.

Write a procedure two-first that takes two words as arguments, returning a two-letter word containing the first letters of the two arguments.

Now write a procedure two-first-sent that takes a two-word sentence as argument, returning a two-letter word containing the first letters of the two words.

Write a procedure knight that takes a person’s name as its argument and returns the name with “Sir” in front of it.

Try the following and explain the result:

As written, the argument john winds up getting substituted for all the copies of word in the body, and john isn’t a procedure, so the program gives an error.

Write a procedure insert-and that takes a sentence of items and returns a new sentence with an “and” in the right place:

Write a procedure query that turns a statement into a question by swapping the first two words and adding a question mark to the last word:

This chapter went really smoothly. Wasn’t sure about Exercise 5.13 but just skipped it and doubled-back later.

Am I asking enough questions? I noticed that AnneB asked and highlighted this question on her blog: “Unanswered question: What does an output of two vertical lines (||) mean and how is it different from two double quote marks?” I had that same question but didn’t explicitly ask it.