Quotes from here or elsewhere in Simply Scheme unless otherwise specified. Refers to “the book” or “SS’ are to Simply Scheme.

Sometimes I show past solutions from previous attempts through the book. Those are for comparison only – I’m not really testing those like I am my current solutions.

Boolean values in scheme are #t for true and #f for false (and #true and #false also seem to work).

You can also define your own predicates e.g.

The and, or, and not procedures, along with if, are useful to use in conjunction with predicates. The book gives some examples.

if, and, and or are special forms.

if doesn’t evaluate all its arguments. It only evaluates the one it needs to based on whether the first argument returns #t or not.

There was a passage that I had some trouble understanding. This might be a bit rambly so maybe skip it if you’re just quickly skimming.

#T isn’t the only true value. In fact, every value is considered true except for #f.

SS then gives the following example (i’ve added the divisible procedure below, which was defined earlier in the chapter, as necessary context)

So backing up, I thought that, in the part that says…

This allows us to have semipredicates that give slightly more information than just true or false.

…that the “this” referred to the fact that…

every value is considered true except for #f

…which I will refer to herein as the Truth-Fact. Based on that interpretation, I expected the Truth-Fact to be a necessary part of how the first version of integer-quotient works. I now think that maybe they were actually referring to the Truth-Fact being necessary for the revised version that they describe later in the section, though, but I’m not sure.

and and or also semipredicates. The book mentions that or will return the first true result:

3 has a truth value of #t. or doesn’t return that #t, but the value itself.

and works the following way:

If all the arguments given to and are true, it returns the value of the last argument.

Of the fact that and returns the value of the last argument when all the arguments given to and are true, the book says the following:

As an example in which this behavior is useful, we can rewrite integer-quotient more tersely:

With this example, I can easily see how the Truth-Fact is necessary to how it works. Specifically, the programmer is relying on the fact that the numeric value of (/ big little) will return as true (for the and) and return as the value that the procedure outputs. When the first argument to the and (the (divisible? big little)) is returned as true, the programmer wants the second argument to be the value that is returned by invocation the procedure. and will return the final value when both arguments are true, and so the number returned by (/ big little) being true is necessary for this function to work in the way the programmer wants it to.

cond provides a concise way of handling situations where you have to choose from among multiple possibilities.

To take one example, for ((equal? letter 'i) 1), (equal? letter 'i) is the condition that gets tested, and 1 is the thing that gets returned if the condition is true. So each cond clause like this is analogous to the first two arguments after an if clause. But with cond you get to have a whole series of alternatives rather than just specifying one like you can in if, and each alternative can have its own condition, unlike in if where you’re just testing the first argument.

cond is a special form and doesn’t evaluate arguments until it needs to.

By convention, the last argument always starts with the word else instead of an expression. You can think of this as representing a true value, but else doesn’t mean true in any other context; you’re only allowed to use it as the condition of the last clause of a cond.

The book emphasizes that one should put the most restrictive test first in a cond statement. Pasting this as images cuz of a formatting issue on the web page:

The book emphasizes that the values returned by if can be used as part of larger functions, consistent with Scheme’s overall approach. E.g. this works:

This returns '(nowhere man), as I expected.

I misread how cond and this program work. I expected it to return 49 for some reason – I think that I thought the first line would have (empty?) evaluate 3 and return #f, and so then (square 7) would evaluate and return the true value 49. What actually happened was that the program returned 3.

The book actually has a relevant example. Let me reread that:

Don’t get into bad habits of thinking about the appearance of cond clauses in terms of “two parentheses in a row.” That’s often the case, but not always. For example, here is a procedure that translates Scheme true or false values (#t and #f) into more human-readable words true and false.

So what is happening? In this example, when the value is something that evaluates to #t, the 'true is returned. The value, despite not being a complex expression like ((equal? letter 'i) 1), has a truth value, and so when cond sees that that value is true, it then proceeds to return the “consequent”, which in this case is the word 'true.
In all other cases, truefalse returns the wordfalse.

I think the point is thatcond can, but need not have, a sub-expression as the first value which gets checked for its truth value. It can be a simple expression like value above. Or a procedure like empty?! Since basically everything in Scheme is true, empty? has a truth value too..

So in the cond for this exercise, empty? gets evaluated as true, and so the consequent 3 gets returned as a result.

Rewrite the following procedure using a cond instead of the ifs:

** Rewrite the following procedure using an if instead of the cond:

Write a procedure european-time to convert a time from American AM/PM notation into European 24-hour notation. Also write american-time, which does the opposite: 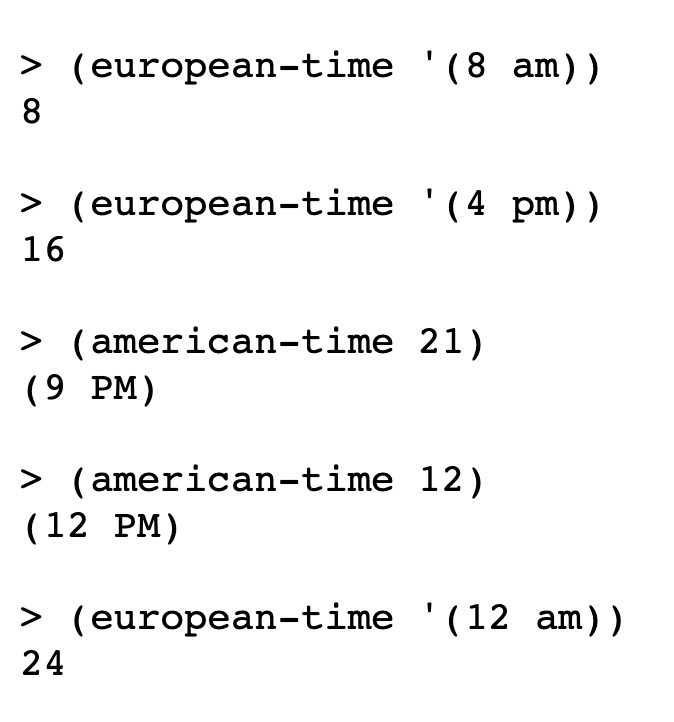 NOTE: for ((equal? (first (bf us-time)) 'am) (first us-time)), replacing (first (bf with last, like AnneB does in her implementation, would be better…

Old answer, from a previous time I did the book:

For european-time, I think checking for whether the entire input is equal? to the us-time for the special cases of 12am and 12pm makes way more sense and is much more elegant and readable than the stuff i did last time with member? etc.

Write a predicate teen? that returns true if its argument is between 13 and 19.

AnneB points out that the if statement is not necessary and this can be represented as:

Last time I went through Simply Scheme I did the following for this problem:

This works but would scale up really badly if you wanted to do a similar sort of thing but with a larger range of numbers.

Write a procedure type-of that takes anything as its argument and returns one of the words word, sentence, number, or boolean:

For this program I had to change the Scheme file I was using. I had to do this cuz the sentence? procedure was returning erroneous results.

And I had been using this declaration at the beginning of my Scheme files:

(I kept the simply_redef.scm file in a definitions subfolder in each place where I was storing .scm files).

For this exercise, I switched to using this declaration:

This caused sentence? to perform as expected 🙂

So with that out of the way, my actual answer to the exercise:

Don’t worry about silent initial consonants like the h in hour.

Sometimes you must choose the singular or the plural of a word: 1 book but 2 books. Write a procedure thismany that takes two arguments, a number and a singular noun, and combines them appropriately:

In the court of doing this assignment, I greatly improved plural.

Answer. plural is where the interesting action is happening here. Note: some of the options in the upper-right of the code window may help with readability.

Again I weirdly don’t make use of last.

NOTE: caught an error in this program after posting and changed the ✅ to an ❌. I discuss the error here

I defined a program that looked for violations of the date rules and returned false if it found a violation, but returned true otherwise. I’ve included versions with both no comments and comments in case the commented version has readability issues. Note: some of the options in the upper-right of the code window may help with readability.

AnneB addressed some issues related to year-validity that I didn’t.

Here’s an earlier attempt of mine at solving this problem.

The organization seems solid. I like how concise my current solution is though.

I did this in an earlier problem.

I’ll do it clean here without the comments

AnneB‘s does more cases than mine does!

Write a better greet procedure that understands as many different kinds of names as you can think of:

Answer. My remove-post-nominal-letters procedure handles a bunch of cases like the

Note: my previous work on this problem in past attempts didn’t deal with the MLK jr case at all.

I really like how buntine organized his solution here with the helper procedures.

Write a procedure describe-time that takes a number of seconds as its argument and returns a more useful description of that amount of time:

I should use the composability if if more to make stuff more concise.

I should consider using helper procedures more than I do.

I should think about whether procedures I’ve already built earlier in the chapter or elsewhere might be helpful with making later procedures (as AnneB did with exercise 6.14).