rember* (remove all instances of a value) 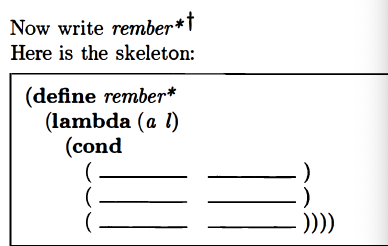 Wasn’t sure how they wanted the reader to go about this one so I peeked at the beginning of their answer:

Ok that makes sense so far. Next line is:

Ah of course. So maybe after we check if car l is an atom, if that turns out to be the case, we check if it’s eqan? to a?

Ok they seem to want to use eq? even though eqan? seems more general. Ok so a is equal to car l, we call rember* with cdr l?

But first, consider, what if car l is an atom but it’s not equal to a? Then we want to cons (car l) together with the result of calling rember* on the rest of l.

And then finally, if (car l) isn’t an atom, we want to call rember* both on the first element and on the rest:

Oh and we want to cons the results of these calls because we want to make sure we capture the structure of the list. 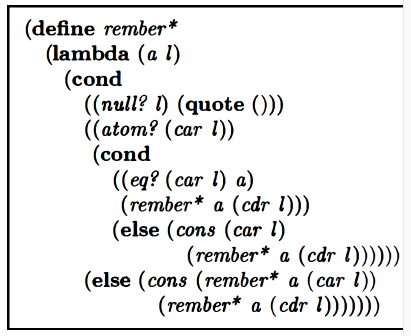 This is a big jump up in complexity from previous stuff. 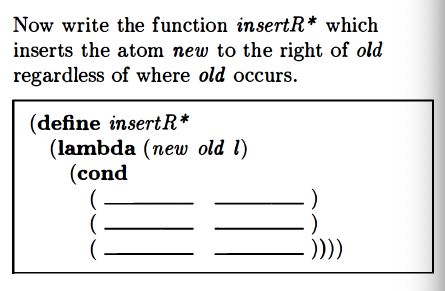 We defined multiinsertR in a previous chapter, but that can’t handle nested list structures, which is what we’re working on in this chapter.

Initially I had the second cond clause as ((atom? lat)). That was a mistake. That would lead to us “digging down” into the structured list until we hit an atom, at which point we’d be trying to invoke null? on an atom:

Initially I used lat for the name of the third argument, but we’re not necessarily dealing with a lat here! So I changed that.

I think this is a reference to the final else in both procedures. If you know the argument’s car isn’t an atom, then you know it’s a list.

multirember doesn’t recur on the car cuz it’s assuming a “flat” list with no nesting, so it just needs to move “from left to right” within the list. It doesn’t need to “dig” or “burrow” into nested structures, which is what recurring on car does.

Now they want something that counts the number of occurrences of something within a nested list structure: 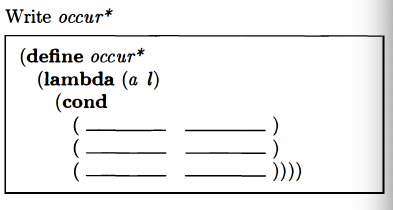 My answer, which matches theirs besides the name:

This is essentially the same as theirs.

My attempt to write insertL*:

This was the original member? function:

My attempt at writing member*:

My attempt at writing leftmost:

eqlist checks if lists are equal:

Wasn’t sure how to write this one. Let’s take a peek.

Ok. Pretty much what I expected so far. If both lists are null then we return true makes sense.

Now I think I’m starting to understand this bit from the book:

The possibilities we’re going to have to deal with are:

The next one I guessed before checking:

Guessed it correctly as you can see:

Ok so, i figured there would be a test involving eqan but didn’t really know or predict what shape it would take:

The next clause handles the case where car l1 is an atom and l2 is a list:

I think I’m starting to get the idea. Probably worth trying to think about all the possible cases we need to handle at this point. There are nine questions as the book says cuz there are two arguments and three possibilities for each.

And then let’s think about what we’d want to return in each of these cases: 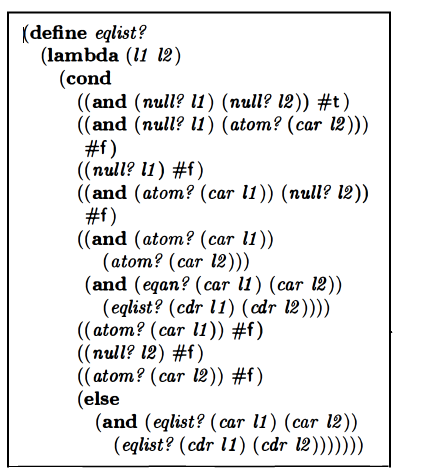 Regarding ordering, the book makes the point that it’s okay to ask (atom? (car l2)) in the second question because by that point we know the second list can’t be empty. (If we tried to take car of an empty list we’d get an error.)

The first case is the one we return true for. In all other cases we’re considering where the first list is empty, we return false. So I think the answer to their question is yes.

…will always return true because of the first list being empty. And we can return false when this is the case. And therefore between these questions…

…we can address the three cases. 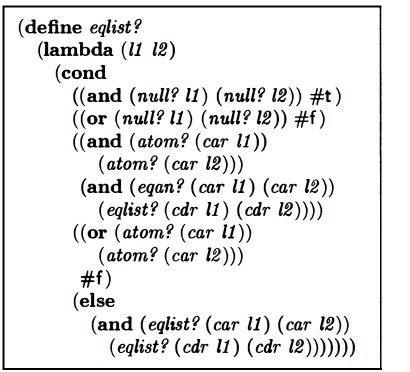 Book says to write equal?. Wasn’t sure how to proceed so i peeked:

Ok that makes sense as a beginning. Let’s think about the cases:

If both s-expressions are atoms, we want to see if they’re the same somehow. Since they’re atoms, I don’t think we need to worry about checking for anything else in these case, since there’s no rest-of-a-list to check.

This is what I wrote:

And then I peeked at some more of the answer:

Ok looks good so far.
If you know that both arguments aren’t atoms, then you know that if one of them is an atom, the other one isn’t, so they aren’t the same. So then you should return false. My attempt at representing this before checking the answer:

And how they did it:

I think these are equivalent and so it’s fine. (EDIT: They ultimately simplified this)

If you know that neither of the two arguments is an atom, then they must be lists. We cannot compare lists directly, so we need to evaluate the lists further with a recursive call. My attempt at representing this before checking the answer:

Whoops. For some reason i was assuming we weren’t gonna use eqlist?, which we just made, lol. My approach actually produces an error, cuz my procedure can’t handle null?. Here’s the correct answer: 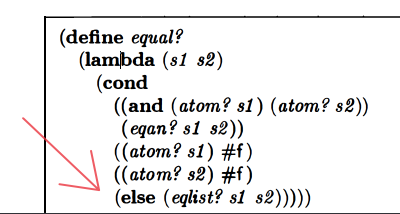 This is their simplified version, presented later: 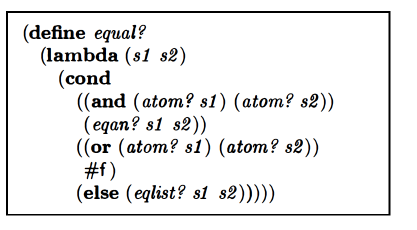 So I did this:

I reasoned since equal? (or myequal?) can handle the cases where two arguments are both atoms or where one is and atom and one isn’t, we could cover all those by just testing to see if car of either l1 or l2 was an atom, and then invoke myequal if either one was true. I thought we should keep the null? tests and also keep the part that addresses the case where car of both lists are themselves lists. It looks like their procedure might be even simpler than this though so let’s see what they did:

So they kept the null? tests. But they dropped the part that checks if car of a list an atom and then invokes equal? if it is. Also, in the else clause, they make a call to equal? in the first part instead of eqlist. Let’s think about this.

If we know that neither list is empty, then we know that the first element in those lists must either be an atom or a list. equal? can deal with atoms and lists (the latter by calling eqlist). So really, given the existence of equal?, the main issue eqlist? needs to deal with is whether either list, or both of the lists, is/are null. Once eqlist? checks for that, and if that’s not the case, it can send the car of those lists to equal? to be dealt with. It also recursively calls itself with cdr of the lists. I think this makes sense. 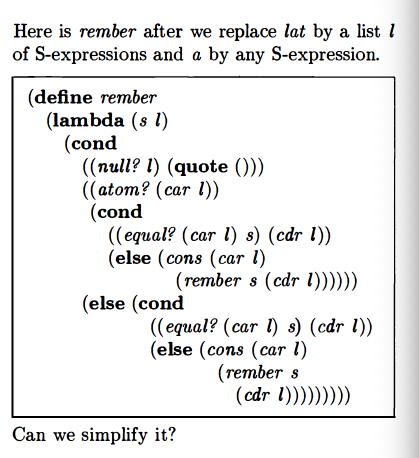 We want to keep the null? line. OTOH, since equal? can handle both atoms and lists, maybe we just need an else line?
If we know l isn’t null, we know car l is gonna grab something and not give an error. equal? can handle both atoms and lists. Whenever we find that s and l match, whether s is an atom or a list, we want to “remove” that from what we return by returning the rest of l. Otherwise, we want to cons (car l) together with a recursive call to remeber with the remainder of the list in order to maintain the recursive structure.

Their version is essentially the same except for the details of how they structured the cond clause (I think this is just a stylistic difference): 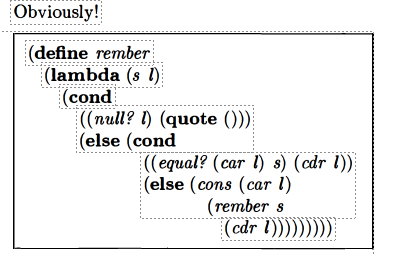 Oh gp yeah, it’s doing a different thing than it did before.
Oh they ultimately did further simplification: 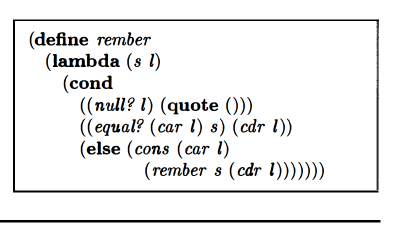 This way of writing stuff is pretty intuitive now from my Simply Scheme work. I find Little Schemer’s way less intuitive. I think part of the reason is I know what the shorter version means and it’s also cleaner, so it seems more organized to me, while the Little Schemer version seems messy. Trying it the Little Schemer way has value though. I’ve been kind of going back and forth.