Some of the exercises revisit the Chapter 10 Tic Tac Toe procedure.

Effects and Side Effects, Functions & Procedures

Only the last value of a given expression within a procedure gets returned, but lots of side effects (e.g. printing stuff to screen) can occur within a single procedure.

In discussing side effects and introducing the special form begin, the authors note that side effects are not consistent with the idea of functional programming. They draw a distinction between a function, which is something that computes and returns one value, with no side effects, and a procedure, which is a more general concept describing a thing that a lambda returns, and which may or may not be a procedure.

This chapter introduces the idea of user input in the form of various procedures. One is read. It only reads one expression at a time though. It can be a little counter intuitive how it works.
If you invoke (read) and then type one word, what you get is pretty expected:

OTOH, if you invoke read and type multiple words…. 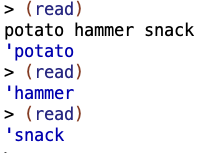 Note we only got one word back for each invocation of (read), despite the fact that we initially typed three words.

What if you want to input and get back a bunch of words? there’s read-line:

If you mix read and read-line things can get weird

20.1 What happens when we evaluate the following expression? What is printed, and what is the return value? Try to figure it out in your head before you try it on the computer.

I think that ‘(the night before) gets printed and ‘(hello little girl) is the return value, since 2 will always be less than 3.

What does newline return in your version of Scheme?

Write a program that carries on a conversation like the following example. What the user types is in boldface.

I figured out what to check condition as being equal to by invoking read-line, typing the term I wanted to use, and then seeing exactly what got returned:

Our name-table procedure uses a fixed width for the column containing the last names of the people in the argument list. Suppose that instead of liking British-invasion music you are into late romantic Russian composers:

Modify name-table so that it figures out the longest last name in its argument list, adds two for spaces, and uses that number as the width of the first column.

Seems to work as intended:

20.6 The procedure ask-user isn’t robust. What happens if you type something that isn’t a number, or isn’t between 1 and 9? Modify it to check that what the user types is a number between 1 and 9. If not, it should print a message and ask the user to try again.

So the existing ask-user procedure is: 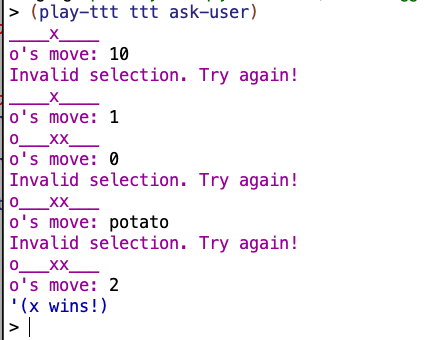 Another problem with ask-user is that it allows a user to request a square that isn’t free. If the user does this, what happens? 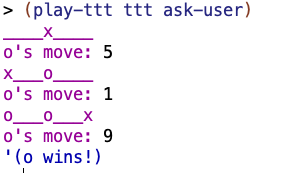 Fix ask-user to ensure that this can’t happen.

I referred to the detailed mind map I made of the tic tac toe procedure back in Chapter 10 for solving this.

Within the tic tac toe procedure we have substitute-letter, which takes the number of a square (e.g. 5 for the middle square) and the word representing the state of the game board (e.g.  ‘____x____ representing the game state “only an x in the middle square, all other spaces free) as arguments. If the square number given is occupied in the game board, substitute-letter returns an ‘x or ‘o as appropriate. If not, it returns a number.

So what we need to do is add a check that playermove returns a number when substitute-letter is called:

At the end of the game, if the computer wins or ties, you never find out which square it chose for its final move. Modify the program to correct this. (Notice that this exercise requires you to make play-ttt-helper non-functional.)

I was really confused at first, because I thought by “non-functional” they meant we’d have to break play-ttt-helper somehow, but I think they just mean that it’s no longer a function cuz it has a side effect!

We can fix the deficiency they want by adding a couple of print-position statements to play-ttt-helper:

I realized I wasn’t using their new Aesthetic Board Display code from Chapter 20, when running tic tac toe examples on my computer, so I added that. Makes things easier to read.

My solution seems to work: 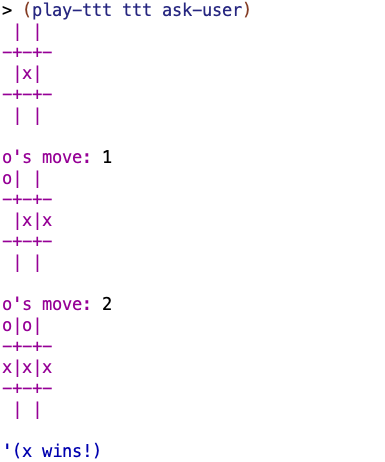 The way we invoke the game program isn’t very user-friendly. Write a procedure game that asks you whether you wish to play x or o, then starts a game. (By definition, x plays first.) Then write a procedure games that allows you to keep playing repeatedly. It can ask “do you want to play again?” after each game. (Make sure that the outcome of each game is still reported, and that the user can choose whether to play x or o before each game.)

My code for game and games:

It seems to work.