Note: I’ve been using code blocks to represent some rewrites and other things sometimes. I think I’ll avoid doing this for now cuz i realized they don’t show up nicely in the email version of my blog that goes out to people who have signed up to get emailed new posts. I’ll try using bold more.

Five kinds of information given by verbs.

Verb needs to agree with subject (first, second, or third person subject)
e.g. I am, you are, he is – each person gives us a different inflected form.

Grammatical subject can perform or receive the action. Active vs. passive voice.
I eat potatoes – active.
I am eaten by camels – passive.

When does the action occur? Past/present/future and other stuff.

Actions in the future. Have lots of auxiliaries like will and shall. You can also use the present tense for the future like in He leaves tomorrow.

E.g. if you want to say an action ended at a certain time you would say something like I had eaten.

You could also say a future action will have been over at a certain time e.g. By 4 o’clock tomorrow I will have eaten.”

Perfect tenses – show that an action was completed.
– Past perfect or pluperfect.
– Future perfect.
– Present perfect.

Peikoff asks if in The new schedule excited me more than I (had) anticipated. the had is correct.

I think so, because the anticipation occurred prior to the schedule being revealed.

Oh the second time he asks he phrases the question as whether the had is mandatory. I still say yes because I think anticipation needs to come before the thing being anticipated by the very nature of anticipation.

Present Perfect Definition: Indicate an action begun in the past but extended up to the moment of speaking.

Present perfect example:  He has made several visits this year.

Rare compared to past perfect and present perfect. E.g. I will have gone to Canada by 50.

Progressive tenses emphasize ongoing continuity of action.
E.g. I am eating, I was eating, I will be eating.

Can add perfect as well e.g. I had been eating.

Present perfect progressive: I will have been eating.

I did go to the movies. I do eat meat
Only works for past and present. Can’t do “I will do eat meat.”

Used to be way to emphasize stuff in the future. Shall/will distinction.

It used to be the case that the normal future tense was shall for first person as in I shall and will for second person as in You will or They will. And if you reversed these, as in I will or You shall, then that gave things added emphasis. But LP says this is basically dead now.
(Note: I personally would interpret someone saying “You shall do it” as giving something extra emphasis as an order or something).

She is asking us to bring as much as we can.

fine. both are present.

She asked us to bring as much as we could.

fine. both are in past.

She asked us to bring as much as we can.

She is asking us to bring as much as we could.

First on the program was the concerto, in which all the soloists take part.

Wrong, shift from past to present.

The children have begun to cry because their father (has) abandoned them.

LP: Typical situation is where you are looking at both events from perspective of actions which began in the past and go up to the present, and so you want present perfect. So normally “has” in second clause would be required. But if e.g. situation was father abandoned kids a year ago and kids are beginning to cry now, then you could drop the has. Not using the has in the second clause would indicate a big separation in time so it has to be done intentionally.

Mood – changes in verb to indicate attitude of speaker.

Compare indicative and subjunctive inflections:
Indicative: I am, you are, he is, we are, they are
Subjunctive: I be, you be, he be, we be, they be

Two main uses of subjunctive:
1. Expressions of wish/desires/demands. I wish she were a soprano. This form is dying.
2. Conditional use (contrary to fact?) – for something improbable or impossible. More important/widely used.

Examples of contrary-to-fact subjunctive use:

With this last one, this indicates doubt, but if you said He acts as if he is sick, that’s more like saying you think the guy is sick.

If he is a painter, he will not ignore Florence.

If he were a painter, he would not ignore Florence.

If he was a painter, he did not ignore Florence.

If he had been a painter, he would not have ignored Florence.

Need to consistent within sentence in tense and mood (generally).

A judge ought to punish the guilty men, and above all don’t let anybody try to bribe him.

I think “ought” indicates judgment of speaker, so subjunctive, but then there is a shift. I’m almost reading this as more of a parallelism issue than a mood issue. Not sure on this one.

LP: Disagrees, actually says “ought” is a simple statement of obligation and so it is indicative, but the second clause is imperative (I had some intuition about imperative but didn’t pursue it for some reason).

Self-analysis: I think I’m reading the scope of the subjunctive too broadly. It’s not just about opinion but about the specific things Peikoff talked about – contrary to fact statements and fervent wishes. “I like pizza” is an expression of opinion but not subjunctive.

Lace is effeminate and frills be hanged!

My view: “lace is effeminate” is present indicative. “Frills be hanged” is I think subjunctive? Kind of a weird example IMHO.

If he is a painter, he would not ignore Florence.

LP says this is shift from indicative to conditional subjunctive.

Passive voice puts the real subject in the background and emphasizes the object.

When is passive voice appropriate? When doer of action is unknown or unimportant. E.g. My brother was promoted to the rank of Captain. There you don’t care who did the promotion, so passive is fine.

Workers will like the new cafe, because you need not leave work to eat.

Shift from workers (a third person group) to the second person you.

We have reached a stage where one ought to be ready for war.

Shift from first person we to third person one.

Participle: verbal adjective. in Running water the running is a participle. Participles can have objects. In Hitting the boy, she did so and so., the Hitting as the object boy.

Also a participle can serve as part of a verb when combined with an auxiliary verb. e.g. I am walking.

Participles have tenses. I have walked. Walked is a past participle.

There are also perfect participles that indicate that the action was completed in the past. You form these with “having.” E.g. Having eaten, he lay down.

Things occurring at the same time: Running quickly, he passed his competitors.
Running happens first: Having run home, he was exhausted.

Verbal nouns.
Can be modified for adjectives or adverbs.
Can take objects.
Gerunds have tense and voice.

Participle
Women having the vote share power with men.

Here we’ve got the having-the-vote women who share power with fine. No problem.

“having the vote” subject here. (I guess “having” is simple subject and “vote” is object of gerund).

This is erroneous. See tree. 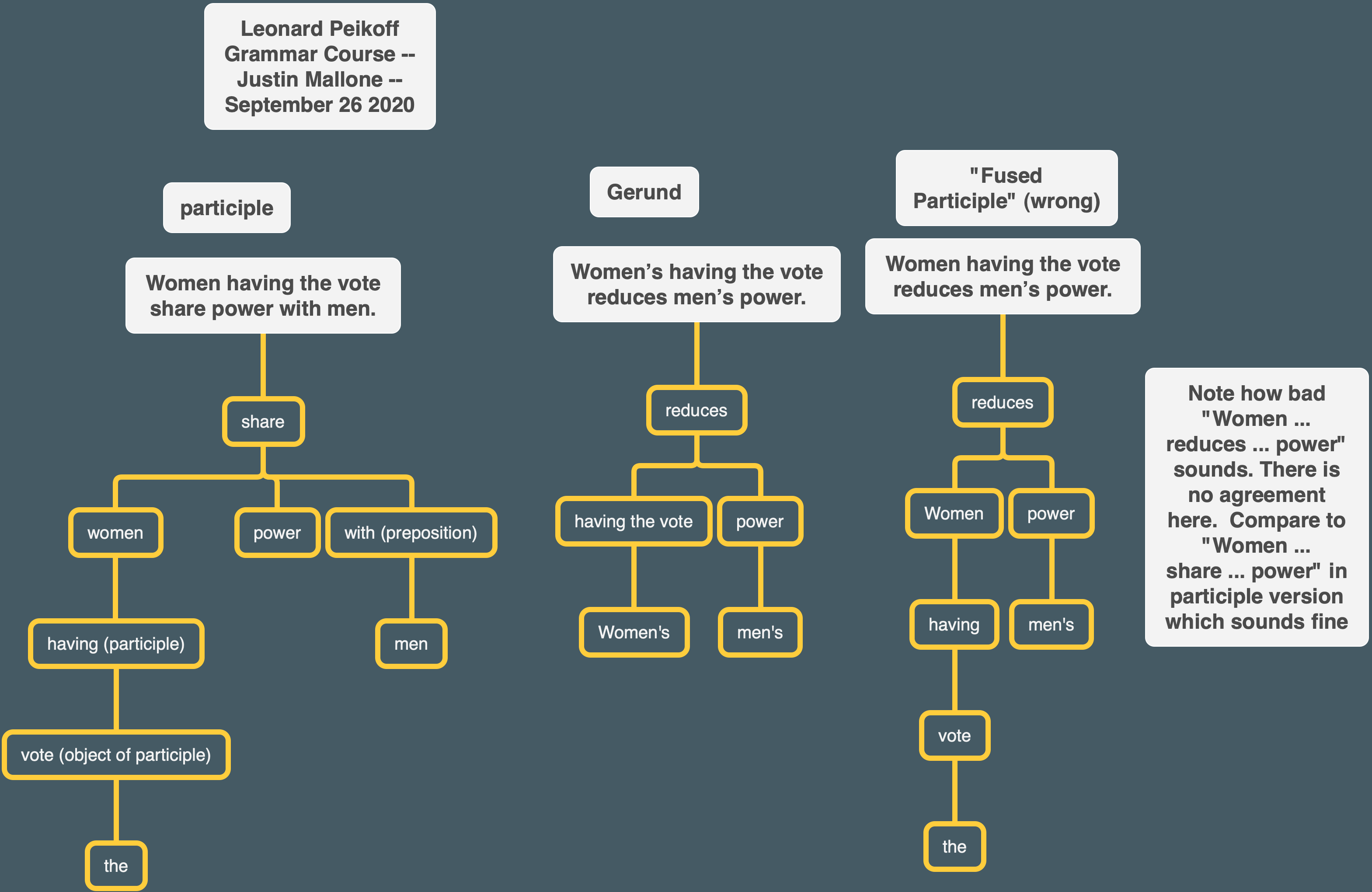 Upon you leaving the room, I shall pay the rent I owe.

We caught John running away.

This one is fine.

We could not think of him/his acting the part.

I thought that maybe if you say its “him” then “him” takes up the “object” slot of “of” and there’s nothing to do with “acting the part.” But I think in that case you could actually just attach “acting the part” as a participle to “him”, just like we attached “having the vote” to “women” in the previous example.