When I say that Peikoff agrees, I mean with the basic nature of the error, not that he agrees with every detail of my analysis or my exact rewrite wording.

They always have and always will take their car to work.

Peikoff: Oh Peikoff actually calls it incomplete. But it sounds like he agrees on how to fix it.
Somene asks why it’s not faulty parallelism, and Peikoff says “It’s not that it doesn’t parallel the structures, it’s that they leave out one form.”

All of the people that are required to be here for us to be able to make up a quorum are now physically present and in attendance.

Super wordy. I’d just nuke the whole thing, start from scratch and say We have a quorum. or Those required for a quorum are now here.

Either you must obey logic or court disaster.

Parallelism. The first part after the Either is a whole clause but the second part after the or is just a predicate. You can’t read the “court disaster” as referring back to the earlier part cuz “You court disaster” or “You must court disaster” don’t work here, because I read the part after the “or” as the result of the first (of not obeying logic). The sentence isn’t presenting two alternatives like from a menu (Either you get the lasagna or the spaghetti), but one thing you must do and then the consequence that results if you fail to do it. With that reading, I think what we want here is maybe something like Either you must obey logic or you *will* court disaster. That’s more parallel because that way we’ve got a clause in both parts and an “auxiliary” verb in both parts as well.
Another possible way to do it would be something like: Either obey logic or court disaster. The “you” is implied there and we drop the “must” so there is symmetry now.

As regards the responsibility of the children for their behavior, I must observe that I agree with the committee who found that no such responsibility could be discovered or verified in any way, shape or form.

This ashtray is in a sense large and also, if the word may be used, expensive.

Wordy.
A fancy rewrite: This ashtray is large and expensive.
A more colloquial version: This ashtray's big and spendy.

Peikoff: Peikoff agrees. Says “in a sense” is a common academic writing hedge.

People take many risks for various reasons, such as making money, for the fun of it, and because they are forced to do so. (F&S)

note added after listening to a bit of homework review but before getting to the full answer “making money” is a gerund, “for the fun of it” is a prepositional phrase, and “because they are forced to do so” is an adverb clause.

Some potential rewrites (the last item I find a bit awkward cuz it’s like a negative reason).

People take many risks for various reasons, such as…
… money, fun, and lack of alternatives.
… making money, having fun, and being forced to.
… for money, for fun, and for lack of any other choice.

On second thought I’m not liking “many” and “various”. Maybe this would be better:

People take risks for reasons like money, fun, or lack of better options.

Peikoff: agrees. Does some rewrites:

Germany recently acquired a country which was formed from the World War. (F&S)

Hmm. I don’t see any parallelism issues and this doesn’t seem particularly wordy. Incomplete thought then maybe? I’m not sure I see what the issue is though…

Let’s think about what it is saying.

Is the reason for bringing up the fact that the country was formed from the World War not adequately explained or addressed?

Not sure about this one.

Peikoff: Context is post WW1, the context is that certain states were created after WW1 and Germany got one of them.

Issue is that the country wasn’t formed from the War, it was formed as a result of, or in the aftermath of the War or something like that. So this is incomplete and very underexplained. A good sentence might say something like “Germany recently acquired a country which was formed by treaties signed after the World War.”

The new President is very conservative and hated by liberals.

[Note: I was low-confidence about this and was wrong…] My guess is parallelism. Maybe cuz conservative is a plain old adjective and hated is a past participle. I’m not sure this would register on my stylistically-problematic scale though. Like you could make it more parallel but they’re both serving the same basic grammatical job so I dunno…

Possible rewrite where I just use two nouns on the other side of the is:

The new president is a conservative and foe of liberals.

Peikoff: disagrees. Not parallelism.
The issue is this: for “The new President is very conservative”, “is” is a complete verb. When we get to the second part, “hated by liberals”, we’re trying to connect the “hated” to the first “is”. But “is” and “is hated” are entirely different verbs and you can’t use them in this way. Because the verb is different, each part needs its own verb written out. A proper rewrite would be:

The new President is very conservative and *is* hated by liberals."

The veal was so good; I couldn’t have found a better restaurant if I had tried to look before.

Incomplete thought I think — based on lecture discussion, I think the issue here is that there isn’t any explicit connection between the two main elements here. Like you want it to be “The veal [at the restaurant] was so good” to have a better connection.

I think with interpreting this sort of thing I’d do lots of gap-filling based on context.

Peikoff: disagrees (he agrees it is incomplete thought but has different reasoning).
Minor error in first clause: “so” needs something to complete it.
Major error: “before” in second clause. Doesn’t tell you before what.

Ours is a political party that is devoted not to words but action.

Parallelism. “to words” is a preposition and “action” is a noun.

Ours is a political party that is devoted not to words but to action.

Peikoff: agrees (I think, though the audio was a bit sketchy around here).

I have an interest and feeling for sculpture.

Parallelism. Both “interest” and “feeling” want to have “sculpture” connected to them by a prepositional phrase, but only “feeling” actually has this with feeling for sculpture. The interest part reads as I have an interest scuplture, which is wrong.

Rewrite: I have an interest in and feeling for sculpture. 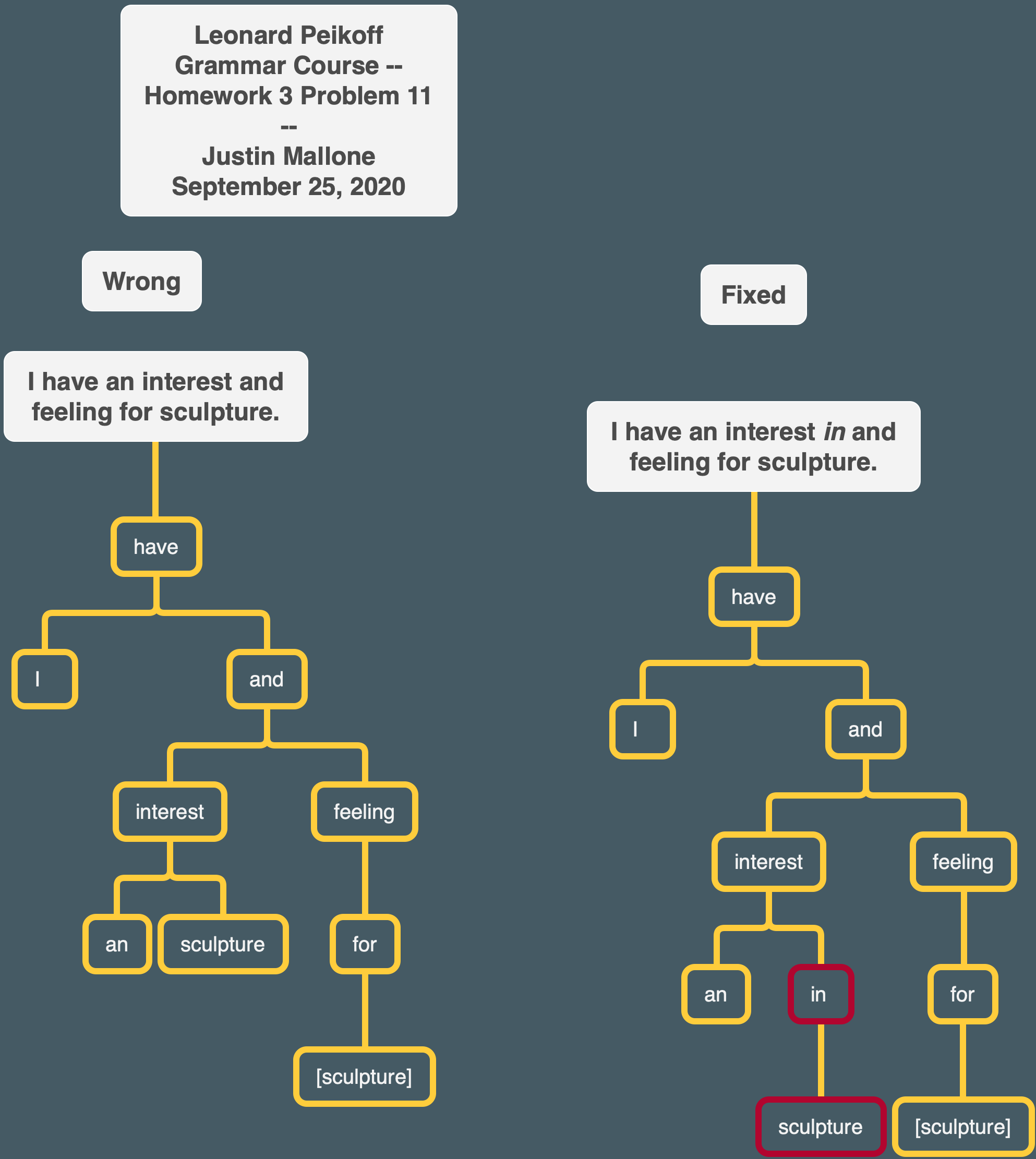 Peikoff: Agrees. Proposes the rewrite I have an interest in sculpture and a feeling for it.

It was a long time after we had grown up that I saw my sister again and this time it was not the same as it had been when we used to meet in a little town which was near L.A. where we had grownup, because she had a baby with her who had just been born and I was years older and felt much more mature.

Uh wordiness or “excessive predication” maybe? Also “as it had been when we used to meet in a little town which was near L.A. where we had grownup” is kind of a weird description of growing up with someone.

Rewrite (I’m filling in some gaps here based on cultural knowledge):

I saw my sister again a long time after we grew up. It was different than the time we spent in a little town near Los Angeles. For one thing, she had a newborn child, and for another, I was older and more mature.

Peikoff: Agrees re: wordy. Peikoff’s rewrite with lots of cutting down: When my sister and I met again as adults, it was different: she had a new baby and I was more mature.

There are several people not interviewed yet and whom I shall see now.

Maybe break this one up:

Rewrite:
There are several people waiting for interviews. I'll see them now.

He liked the books which were in the bookcase which he had bought at the auction he attended during the Fair which was held at Christmas and which held volumes which were famous in many circles which he encountered when he pursued his avocation which he enjoyed.

This was my initial rewrite:

He liked the books on the bookcase. The bookcase was purchased at an auction during a Fair held at Christmas. It held famous volumes - famous, at least, within the many circles he encountered when pursuing his enjoyable avocation.

A way more aggressive rewrite might be:
The bookcase he had purchased at the Fair held many famous volumes which he liked.

Peikoff: Sounds like his edit was kinda in-between mine.

Combine the following into a unified sentence, with appropriate subordination:
English is a difficult language. The homework in this course takes too much time. Grammar is worth studying. The teacher goes too fast. Subordination in English is especially difficult.

My initial attempt:
Despite English being a difficult language, the homework in this course taking too much time, the teacher going too fast, and subordination in English being especially difficult, grammar is nonetheless worth studying.
IRL that’s too long though.

Here’s another attempt, dropping the point about subordination:
Despite the difficulty of the language, the time-consuming homework, and the fast pace of the course, grammar is worth studying.

Another attempt [brackets are stuff I might leave implied normally if writing in this style but I wanted to make them explicit]:
The language is hard, the workload [is] heavy, the course [is] intense, but grammar is worth studying.

More literary:
Hard is the language, heavy [is] the workload, fast-paced [is] the course, but grammar is worth studying.