How do you write rember-f? My attempt:

Some work I did to understand this:

This returns a procedure that checks whether an argument x is equal to “hat”:

And these pass the arguments “hat” and “cat” to that argument, respectively, returning the appropriate value: 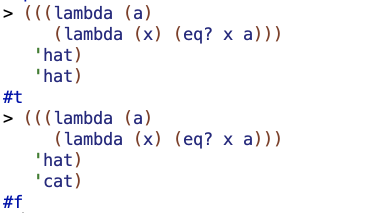 This was insertL from a previous chapter:

And here is the final version:

Note the two changes: test? is put in a separate lambda, and is also grouped with myinsertL-f in the recursive call.

Theirs is basically the same.

This was insertR from earlier:

And this is my insertR-f:

This is what I attempted at this point before reading further:

They take a similar approach to my second one above:

You can solve insert-g the same with their seqL and seqR procedures, the only difference being that you pass in cdr l to the function instead of l directly:

They wind up writing insert-g as an argument of one argument seq which is either seqL or seqR: 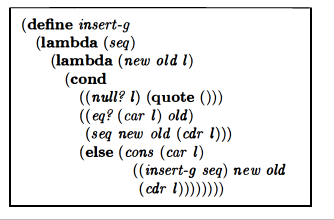 We’re using a function-creating function to define arbitrary functions in terms of that function, which is something we haven’t done before.

Also, since our function-creating function returns a function that itself takes arguments, we don’t need to use a lambda in our definition.
They had a different point in mind: 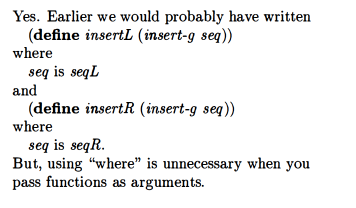 Their version works the same.

I’m a bit confused about this. The first thing I’m confused about is what role seqrem is performing exactly. Stuff like seqL actually performed some operation, but looking at it, seqrem just seems to return the list.
Ok thinking about it more, invoking insert-g with seqrem returns a procedure with seqrem in place of f in the body of insert-g. So we have a seqrem function that just returns the list argument its passed whenever the car l is equal to old:

We see seqrem returning the list it’s passed in this trace result:

The (and bacon) value gets the preceding values (excluding the value we want to remove, which is skipped) cons‘ed on to it by the invocations of the procedures at higher levels of the chain of recursive invocations. And thus we get ‘(pizza with and bacon).

In the context of discussing the value procedure from chapter 6, they ask the following: 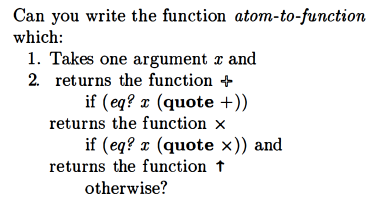 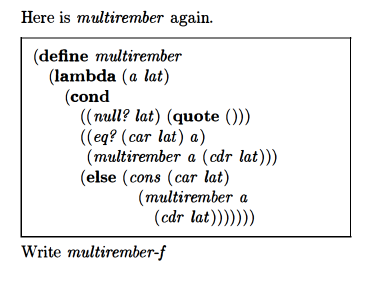 Their solution is essentially the same.

Their version is essentially the same. 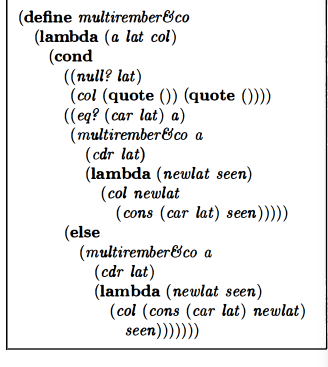 Initially, null? lat is false, so we skip to the next line.
(eq? (car lat) a) is true, so we recursively invoke multirember&co with 'tuna as a, () (or the current (cdr lat) as lat.

a-friend is used by the lambda procedure to generate a new argument which becomes the col for the recursive call. This new argument is a function of two arguments which invokes a-friend. The first argument given to a-friend within this function is the cons of car lat (which is currently tuna) and the argument newlat. The second argument is the argument seen.

null? lat is true within the recursive call, so we invoke our col procedure – the function of two arguments involving a-friend– on two empty lists. The following represents the operation of the lambda function in the base case:

I found a stackoverflow discussion on this procedure which I found helpful. I talked about this a bunch of the video. I found this post, which was linked in the discussion, very helpful, along with the top stackoverflow answer and the one with the flowcharts.

(and tuna) is not null, and (car lat) of it (and) isn’t equal to tuna, so we go to the else clause. We pass in ‘tuna as the new a and (tuna) as the new lat, respectively.

Within the first recursive call, lat is still not null (it’s (tuna) now), so we go to the eq? line. (car lat) is eq? to tuna, so we make another recursive call. The arguments to this new recursive call will be tuna as a, the empty list as lat, and what we’ll call z2 as col.

What does z2 consist of? A function of two arguments that invokes z1 and conses tuna onto seen.

Within the second recursive call to multirember&co, the lat is empty, so the null? lat condition returns true. Since that is the case, we then pass z2 two empty lists. This ultimately leads to the procedure returning #f, because by the time the arguments we cons values onto get back to a-friend, the second argument is not null: 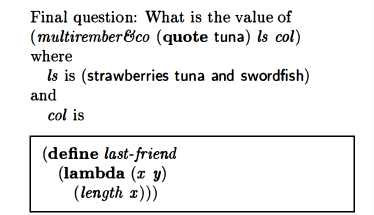 Question: if oldL and oldR are the same, should we add new on both sides? Apparently the authors don’t think so, cuz their version was essentially the same as mine. 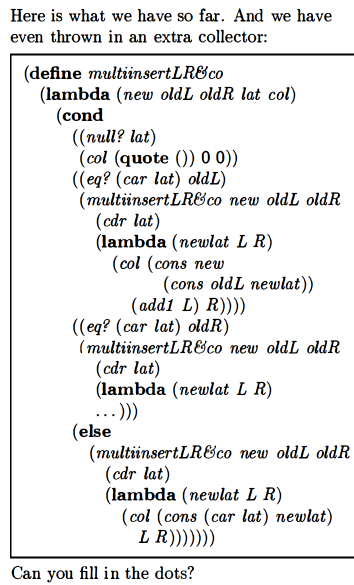 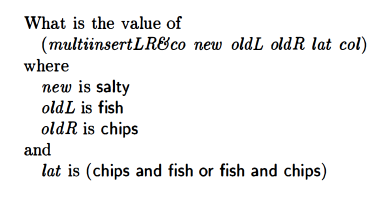 We therefore recursively invoke multiinsertLR&co. The procedure we use, which I’ll call q1, is as follows (note that I’m using list as the col function:

If we use q1 on the empty list and two 0’s that we get when the lat is null we get the following:

lat is not null and (car lat) matches neither our oldL nor oldR. We therefore go to the else and recursively invoke our multiinsertLR&co procedure with the following function serving as col:

lat is not null and (car lat) matches oldL so we recursively invoke our multiinsertLR&co with the following function serving as col:

lat is not null and car lat is not equal to oldL or oldR so we go to the else clause and recursively invoke multiinsertLR&co with the following function serving as col:

lat is not null but is equal to oldL so we recursively invoke multiinsertLR&co with the following as the col:

lat is not null and (car lat) is not equal to oldL or oldR so we recursively invoke multiinsertLR&co with the following as the col:

lat is not null and (car lat) is equal to oldR so we recursively invoke multininsertLR&co with the following as the col:

lat is null so we return the empty list and two 0’s to the last procedure we generated as the col:

See this stackoverflow thread for useful discussion of this procedure. In particular, see this answer and the flowcharts in this answer.

I’m just doing one “branch” or sublist (the (9 1 2 8)) but see the stackoverflow and especially the flow charts for full details. After I did the first branch I felt like I got the idea.

This is more or less what the book winds up eventually revealing as the answer: 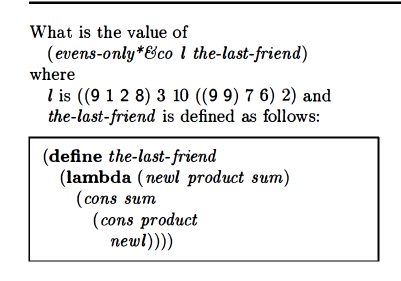 the list is not null. (car l) is not an atom. We go to the final else line. Here is a detailed description of what happens there from stackoverflow. Where (car l) is a nested list:

Imagine you have the results from removing, summing and adding the numbers in (car l) and call these newl, product, and sum; then imagine you have the results from doing the same thing to (cdr l), and call them dnewl, dproduct and dsum. To your waiting continuation, give the values produced by consing newl and dnewl (since we’re producing a list of lists); multiplying together product and dproduct; and adding sum and dsum.

So I’m going to break the col‘s up into named subprocedures again, using a flow chart from stackoverflow as a guide.

y1 partially represents what happens in the final else line of evens-only*&co:

To get the correct value for the overall final procedure, we can invoke y1 with  ‘(2 8) 16 10, which represents the 1) list of even numbers, 2) product of evens, and 3) sum of the odds, for list (9 1 2 8). If we use these values, we get the right answer. The exact mechanism by which we calculated these numbers has not yet been revealed, and we’re just taking them as a given for now (I pulled them from the chart). The actual source of the numbers is invoking evens-only*&co on (car l), (car l) in this context being (9 1 2 8). So let’s analyze what the result of that would be so we get a better understanding as to what’s going on.

So we analyze it under the else clause for when atoms are not even.

y2 partially represents what happens in that else clause:

Note that, within the lambda, the 9 from l is already in the procedure. Where’s it coming from? It’s the car of l.
Note that the else clause invokes evens-only*&co* on (cdr l). We’ll keep recursively invoking that to get more values.

l is not null, and (car l) is an atom but not even, so this will be similar to before.

l is not null and (car l) is even. From stackoverflow:

You can see that y4 is pulling the (car l) (or 2) in in a couple of places here – consing it onto newl and multiplying it by p. Once again, in the actual procedure, we’re getting our arguments to the lambda from the result of a recursive call, but we can also invoke y4 with those arguments, which are (8) 8 0