Infinitives can be adjectives, adverbs, or nouns. Most of the time, functions as noun, is similar to gerund.

Sometimes, idiomatically, you need to use an infinitive or a gerund. e.g. with “admits” you use a gerund. He admits to seeing little of her. (seeing is a gerund object of a preposition here). Compare to “professes”. He professes to see little of her. 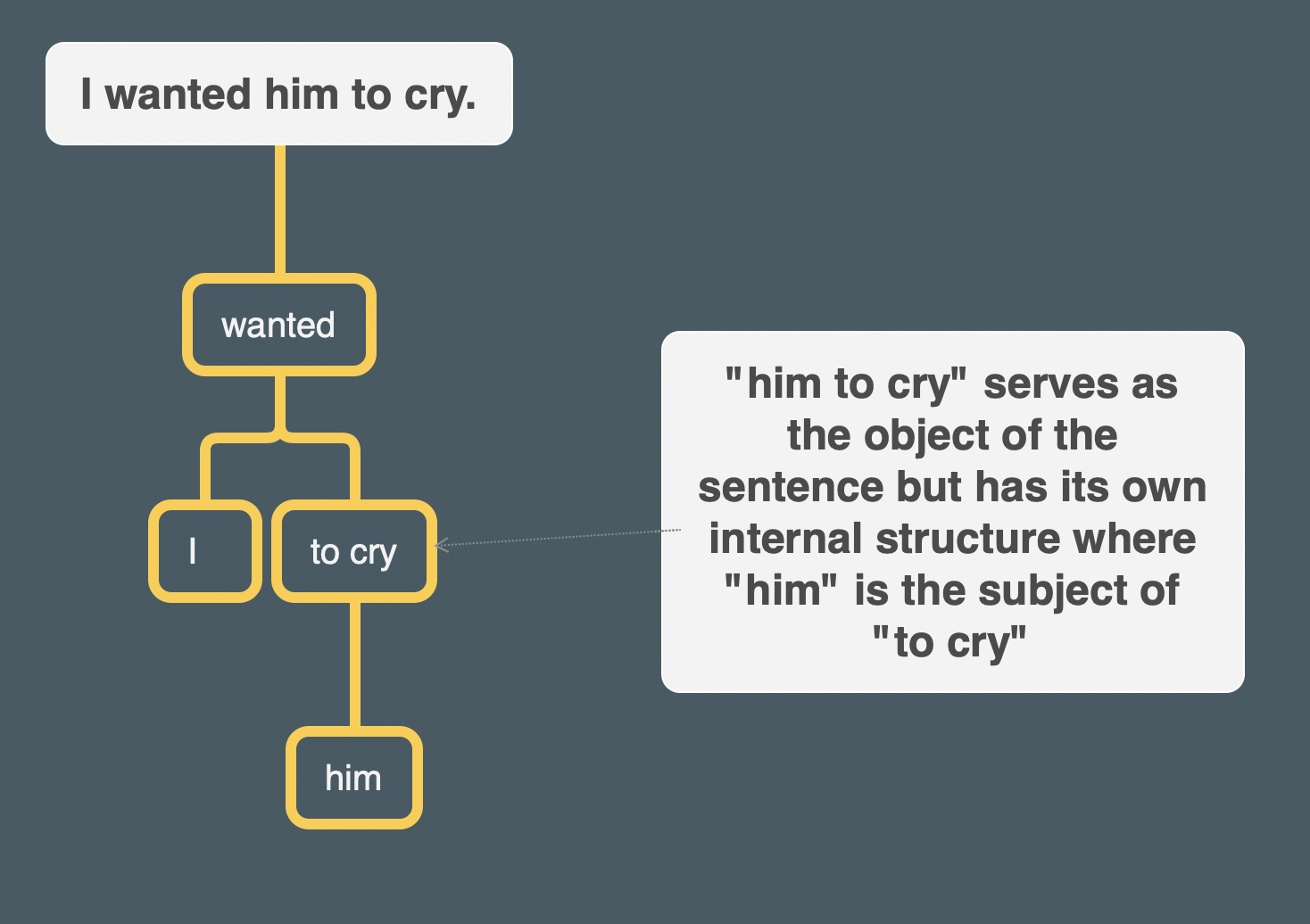 – To eat apples is good. “to eat” functions as a noun but can take object “apples” and “to eat apples” services as the subject of the whole sentence.

Infinitives With No To

Infinitives have tense and voice.

What tense do you use when?
– Present infinitive: when the infinitive refers to a time which is either the same as or later than the main verb. Peikoff says you use the present infinitive 99/100 times.
– E.g. I like to eat – present infinitive because it’s the same time as the liking.
– E.g. I intended to do it. – intending is in past, but doing is same time as intending, so present infinitive.
– Perfect infinitive: when the infinitive refers to a time which is before that of the main verb.
– I would like to have lived in Aristotle’s time. – You wish now that you had lived thousands of year ago. This gets the perfect infinitive.
– Compare:  I would have liked to live in Aristotle’s time. Peikoff says this whole thing is in the past and so you don’t give it the perfect infinitive. I think the idea is that you are looking at things from the perspective of what you would have enjoyed in the past as opposed to the previous example, which was talking about what you would like right now.
– ❌ Erroneous:  I would have liked to have lived in Aristotle’s time. No English use for such a sentence.

As a general rule, don’t split constructions. Because English is a distributive language (where order matters), and you can’t tell what goes with what from word endings, then order matters and splitting stuff up needlessly is generally bad.
– Don’t do stuff like Jack yesterday hit the ball. or The building, which he had late last spring turned over to the tenants, was deteriorating.
– Split infinitive example: **The golf intended to, in some way, break the record.
– Rule against splitting infinitives not absolute.
– E.g. It frightened the girl to suddenly find herself in this position. Peikoff says if you rewrote this as It frightened the girl suddenly to find herself in this position, it would be ambiguous whether suddenly modified the “frightened” or the “find.” “Squinting construction”.

General rule on verbals: Do not dangle them. You dangle something when you can’t easily connect it to the words it refers to.

Makes it look like candy is doing the watching.
My guess as to how to rewrite:

Watching the movie, we made the candy disappear.

Dangling Gerund
By polishing the silver, your table can be pretty.

Makes it sound like the table can be pretty if it polishes the silver.

By polishing the silver, you can make your table pretty.”

Dangling Infinitive
To see properly, eyeglasses must be clean.

Makes it sound like eyeglasses must be clean so that the eyeglasses themselves can see properly.

To see properly, you must keep your eyeglasses clean.”

What can pronouns do? Anything a noun can do.

1. Personal pronouns – I, though, he, she, it etc. case important issue here.

The car that I bought was expensive.

“that” serves as an object within its clause – I bought that.

The car that is on the street is mine.

“that” serves as subject within its clause – that is on the street.

The idea that man can lift a ton is absurd.

“that” here is a pure conjunction – serves no grammatical role as subject or object within its clause.

that, who, and which are three most important relative pronouns.

That can often be left out, especially in less formal writing.

5. Demonstrative pronouns — I never saw that happen before

7. Reciprocal pronouns — Each other, one another

In languages like latin and greek, regular nouns, like “servant”, have case and have different endings depending on where they are in the sentence. English is distributive and generally conveys whether something is the subject or object by word order. Nouns in general do have a possessive case indicated by an apostrophe + s. Peikoff mentions that it’s considered bad form to use possessive case for inanimate objects (e.g. “the room’s length” — you are supposed to say “the length of the room” or something like that.)

So the last stronghold of case in English is personal pronouns and one relative pronoun (who/whom).

Case and linking verbs – Peikoff says that verb to be takes the same case on both sides because it doesn’t indicate action but state. E.g. It was she who paid is correct, because the it before the “was” is serving as the subject and so the “she” has to agree with it. This page names this issue as the predicate nominative and talks about it as being a controversy in which the view has gradually changed to accepting stuff like It is me instead of It is I, especially in less formal writing.

❌ ERRONEOUS: My initial thoughts: listening to what Peikoff said and reading the article I linked, I think the idea is that you keep things in the subjective case if you have a linking verb linked to the same subject. But I don’t think it would apply to the case of a different subject and object, cuz then you don’t have a mere renaming of a noun.
✅ CORRECTED: Peikoff applies the idea of keeping things on both sides of “to be” to cases where the pronouns refer to different people. See below

This money belongs only to you and I.

This is wrong. “I” is governed by the preposition “to” so it should be “you and me.”

Everyone but Tom and he entered the race.

This is wrong. “but” is a preposition in this sentence, so it should be “Tom and him”.
Webster’s 3rd dictionary:

A group of we girls went shopping yesterday.

“we” is an object of the preposition “of” so it should be “us”. “girls” is an appositive.

“I know” is a parenthetical remark and isn’t really part of the grammar of the sentence.

O’Henry is a writer whom I think will be read for centuries.

Who/Whom shall I say is calling?

“I shall say” is a parenthetical statement. The first word is not the object of “I shall say” but the subject of “is calling”, so it’s “Who.”

First clause: “whoever” is the subject of “whoever wastes time.” The whole clause serves as the object of “fine”. (Would be different analysis if “whomever” was just by itself after fine).

Second clause: “whomever” is the object of (rewritten for grammar clarity) “he hates whomever.”

He has respect for who(m)ever has money.

It is “whoever” because “whoever” is the subject of “whoever has money.” The whole clause is the object of “for”.

Some pronouns have non-obvious number.

Each of these books (is/are) rare.

It’s “is” because you are referring to each book separately. “Each” means “each one.”

Everyone has their own hobby.

“Everyone” is singular, so you’re supposed to do “Every has his own hobby” or “his or her own hobby”.

Some pronouns can go either way re: number, such as “none”.

All is lost – all can go either way, and in this context “All” stands for “everything”, so you use singular.

How many battles did you lose?
All of them are lost – plural in this case.

Be sure to know what your antecedent is!

Plato is among the Greeks who have influenced mankind.

“Greeks” is the antecedent of “who” here, so plural “have” is needed.

Plato is the only one of the Greeks who has written many dialogues.

“One” is the antecedent of “who”, so singular “has” needed.

A list of many books, in addition to thousands of phonograph records, have been given to the public library.

Wrong. “List” is singular, so verb should be “has”.

The staff has conflicting opinions about this gift.

Collective noun. Verb agreement depends on how you’re thinking about the noun. Are you thinking of the noun as one entity acting together, use singular. If you’re thinking of it as a group of individuals, use plural. The way this sentence is written, I’d say it’s emphasizing differences in the staff and so should be “have conflicting opinions.” LP agrees.

The one thing I myself do not like are the obscenities in these books.

You have to make verbs agree with the subject, not the complement. So it should be “is the obscenities.”

More Than One Possible Antecedent

Bill warned his uncle that he would be leaving on Tuesday.

A particular type of this error is when the pronoun is really far from the noun it refers to.

He sat by the window all day and worked steadily at his editing of the magazine that had been lying on the corner table. It was too small to give much light.

“It” is referring to window, lol.

(Not sure I get the scope of this category of error. Kinda sounds like the essence is, be careful when using pronouns to refer to more than a simple noun. It can be okay to do so, but don’t be ambiguous.)

Babe Ruth was hitless during the game, which caused much comment.

Babe Ruth was hitless during the game, which many men attended.

This one is fine because it’s unambiguous.

Echo loved Narcissus, but he loved himself even more; this is true in real life, too.

“this” is super unclear.

We were asked to remove our coats, which we did happily.

“which” refers to act of removing coats, and this is fine cuz it’s not ambiguous.

Pronouns With No Antecedent

They have this great chef at the restaurant.

no reference for “this”, needs to be “a great chef”.

My mother is a music teacher. It is a profession I hate.

“It” refers to “teaching music”, but that hasn’t been stated.

Although it is cool by the lake, it looks full of swimmers.

First “it” is the “it” you use when saying stuff like “it is raining.” Second “it’ is referring to lake.

Broadly:
who – people
which – things
that – both

Peikoff goes into some fine distinctions here that didn’t seem super important. Basically, the more you’re focusing on individual people/humanity, the more you have to use who, and the more impersonal you’re being in your discussion of people, the more that or which are okay.

Grand pianos, which are uncommon, are necessary to modern orchestras.

“which are uncommon” is an aside. Non-restrictive clause. Such clauses can take “which” so this sentence is okay.

Grand pianos which are out of tune are a performer’s nightmare.