Things to focus on improving for this post:
1. Go step by step more
2. Test stuff more
3. Make a tree

Got stuck in my attempt to understand this one, so seemed worth doubling back.

This procedure has an if statement. Can I actually write one of those on my own? Let me try it (using an expression from Roman history)

Here are some very simple examples of if from a Scheme guide which I’m bookmarking now 🙂:

it also describes the general form of the syntax:

Note that you don’t need to expressly introduce the alternative with an else or something like that.

Let me make my own if statement.

It actually took me a couple tries to get the syntax and parentheses correct. Probably a strong indicator that testing my understanding of writing if in Scheme was a good idea!

I get the expected output from this.

I got a little confused trying to figure out what let does and how it’s different than lambda. I don’t wanna get stuck in the mud by jumping the gun (intentional mixed metaphor 😉 ) so I won’t worry too much about this for now. It seems like let is kind of similar to lambda, except with lambda you don’t give the temporary function a name and with let you can (or have to? Not sure).

I found this article which contrasts let and define and I found the comparison helpful.

Following the advice on that page, I first used define in the interactions window.
Here’s what they showed should happen: 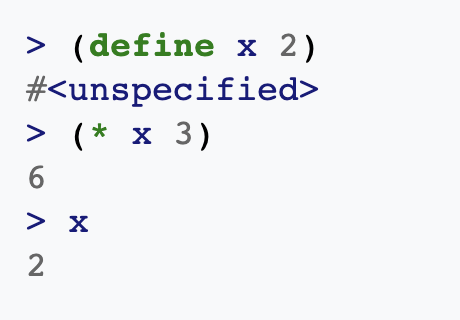 And here’s what happened for me:

Pretty close! I’m missing the line with #<unspecified> and just have a blank line there instead.

This shows that even once used, the variable x continues to exist, it is defined for all to see, use and (as we shall see later on) modify at will.

The value of the x as 2 persists once it is defined as 2.

They contrast let with this:

If I enter the following statement in the interactions window:

But if I try to get the value of x again:

Notice here, how once the block of code has finished executing, the variables x and y are no longer accessible.

ERRONEOUS ❌: You also can’t just define something in a let and return the value.

ERRONEOUS ❌:let expects a procedure. If you evaluate (+) by itself, it returns zero, and so if you use it with just one number, it returns that number.

CORRECTION: let expects a procedure above because of the parentheses around the final x. You actually can define a let and just return a value: 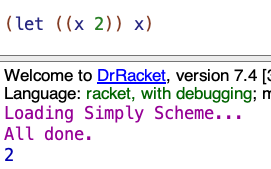 Thanks to AnneB for pointing this mistake out!

So if we did want to just get the same value x value out of let for some reason in the above example, we could do:

Which gives us 2. I don’t know why one might want to do such a thing, but it could be done.

The article also contrasts the general form of the two expressions let and define:

In general, the form of a define statement for a variable is as follows:
(define <variable name> <variable value>)

With let, you actually use the variables to perform some operation immediately and then the values of the variables are no longer available. Given that, it makes sense that you would have to say what that operation is immediately within the let statement. Whereas with define, because the assignment of a value to a variable persists, we can assign some variable a value and then use it whenever later on.

It seems like let is kind of similar to lambda, except with lambda you don’t give the temporary function a name and with let you can (or have to? Not sure).

With let, it does look like you have to assign something a value and then do something with it.

I was thinking of the difference between let, lambda, and define, and how to try to put the difference in an easy-to-grasp way. If this isn’t quite right then hopefully someone will say it’s wrong and I can correct it 🙂

With define, you give some value to a name and use it to do stuff later on. The value could be a word, a number, or a function. And you can refer back to that value with the name you gave it later cuz you’ve defined it in a lasting way.

❗️CLARIFICATION: You can actually use define in a non-lasting way that only works temporary within a function:

this program will print pizza if the program is called, but the variable bestfood is not accessible from outside the program. Thanks to AnneB for pointing this out.

With let, you give some name to a value in order to do stuff right now. You do your stuff within the let expression.

With lambda, you skip the whole naming part and just start immediately doing stuff (though you do have to specify what you’ll be doing stuff to.)

Let’s see what this actually means in practice with a simple example.

This returns '(5 7). This is the behavior I would expect so far.

reduce is similar to the accumulate function used in the Acronyms example. Accumulate “takes a procedure and a sentence as its arguments. It applies that procedure to two of the words of the sentence.” Chapter 17 of Simply Scheme says that “Reduce is just like accumulate except that it works only on lists, not on words.”

returns 'lalalala. Note that if you just give (la la la la) to word, it does not work, because word doesn’t expect a list.

So you really need the reduce here.

As I said in my last post, append append makes a list out of the elements of lists provided as arguments.

What if the lists you are trying to append are double-nested?

this produces
'((New York) (New Jersey) (Connecticut)), where the elements are in a single list, but within that list, they are only nested once.

I think I should play around with lambda a bit more as well.

If we just do:

We get back a procedure object.

So what we’re doing in the above is generating our procedure object (with the lambda in the highlighted part), and them giving Scheme something to apply that object to (the 3).

Now I’ll start trying to combine the different parts I’ve talked about to build up to a larger procedure.

First let’s try map and lambda. Part of the choices program draws upon a helper function prepend-every, which uses map and lambda, so that seems like a good test case.

I talked about prepend-every a bit in my last post.

I saw that it prepends an item to each element of a list. For example:

So how does this function work, in detail?

Let’s look at a different version of the function first.

prepend-every-nomap has had the map removed and the parentheses adjusted accordingly. What value will this give us when we run it?

So rather than prepend apple to each element of the list, it prepends apple to the whole list. Why?

All this shows the role of map in the prepend-every function and how it can operate together with lambda. map can enable a lambda function to do a whole lot more than it might be able to otherwise.

I made a version of the choices procedure with print statements for smaller and menu (and newlines to clean things up) in order to get a better idea of what was going on:

I ran the above with (choices '((vanilla chocolate)(cone cup)(small large))) as the input and got the following back:

So here is my attempt to explain this:

I accomplished the goals I wanted to in terms of learning methodology. I went step by step, tested out lots of stuff, and made a tree. I found the step by step and testing stuff out things very helpful. In particular, I think I made some gains in the skill of figuring out how to test stuff, which seems important. I think the print statements I used in the “Putting Things Together” section are a good example of this.

I also made a tree. I am not sure how much the tree helped. I think maybe it helped a bit with understanding the structure of the program, but I think testing out the individual parts of the program helped way more with that.

Here is my attempt at a tree for the choices procedure. 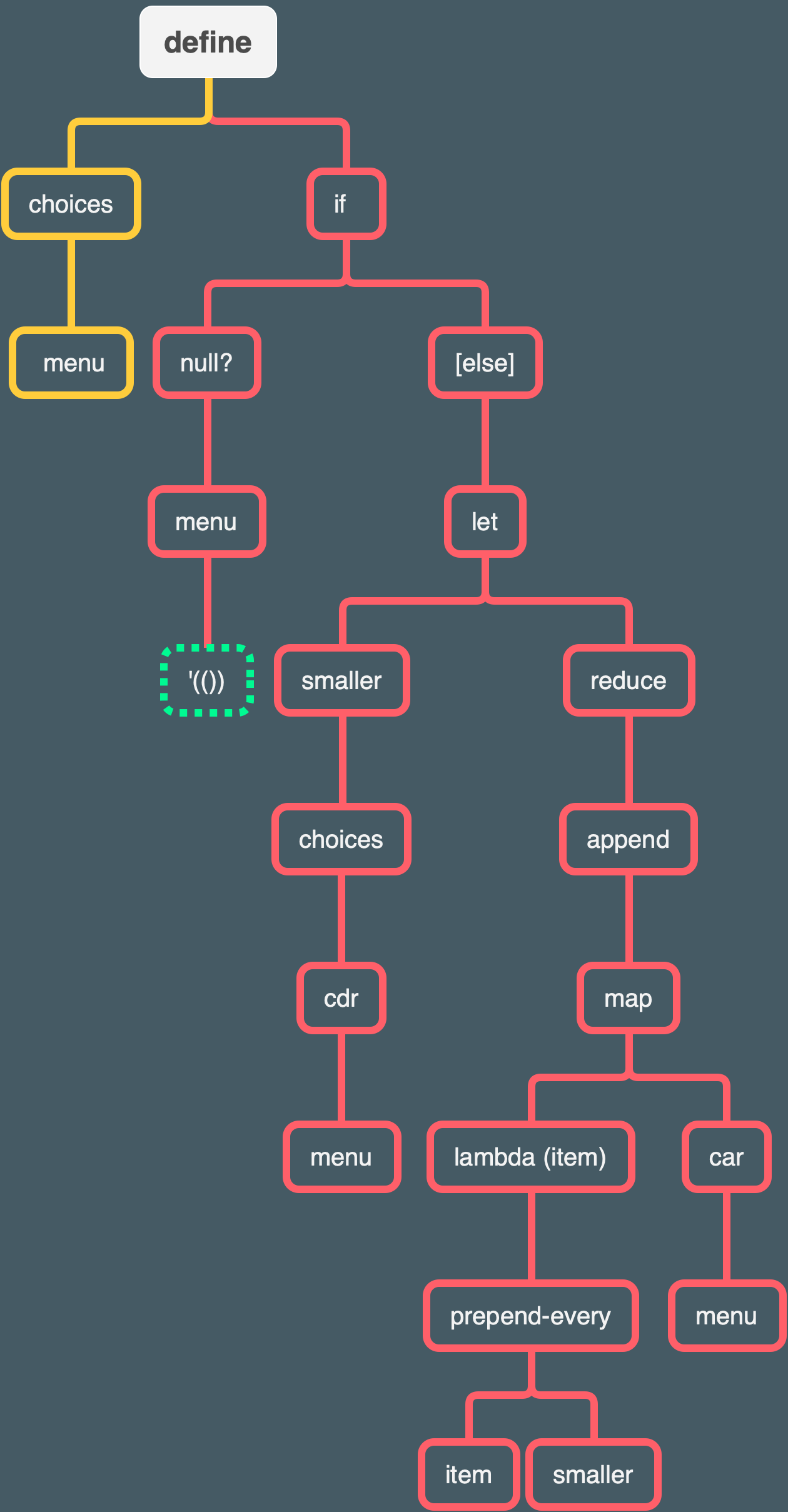