These posts do not represent a Fallible Ideas Learning Plan. Why I am doing them, then? What is the goal?
I’d like to be able to try doing a Fallible Ideas Learning Plan at some point, but I’m pretty intimidated by the idea of doing so. So I thought as a preliminary step, I’d just start writing some thoughts about my activities, stuff I was thinking about … basically memorializing thoughts and developments regarding stuff I’m spending time on anyways. And then if I do that for a while, and can do it regularly, then maybe I can try a small FI Plan, which would basically just be talking about some goals related to stuff I was already doing and discussing anyways. That way, I’d avoid being intimidated.
I was actually doing an even smaller step before doing these posts. I made some lists of stuff I’d like to get done and used the Notes app on macOS to track them. So these posts are sort of an upgraded version of that activity tracking + some writing. I use the activity tracking as an example of explaining something simply below.

Peikoff talks about the following sentence towards the beginning of lecture 2 of his grammar course:

What he will decide is important.

Here’s a transcript of what he says: 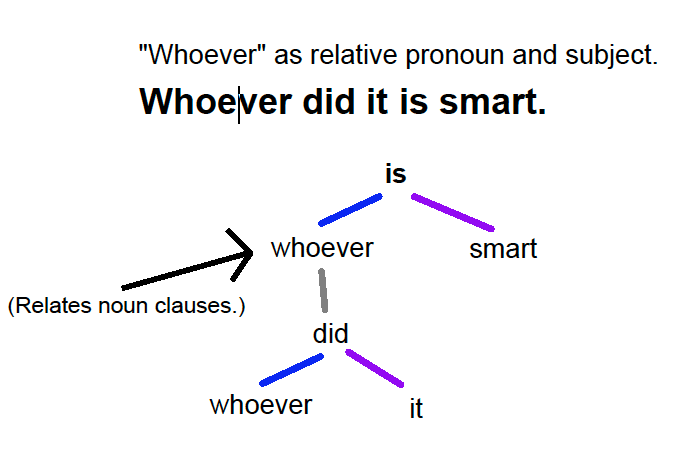 Elliot’s analysis seems somewhat different to me than Peikoff’s. Below I’ve tried to represent what I think Elliot’s approach to analyzing the sentence would be and what I think Peikoff’s approach is. Any errors are my own! Click here to view or download if you don’t like the embedding.

what he will decide is important

I made this recipe. I don’t think I’ve made crepes at home before. They came out okay. I used too much batter for the first one and got a sort of pancake burned on one side instead of a crepe. You need to be fairly minimal with the amount of batter you use. I realized this after double-checking the recipe instructions and noting where they says:

Pour a small amount of batter (I used 1/8 of a cup of batter for my small frying pan) in the middle of the hot pan. Then pick up the pan and tip and twirl it until the entire bottom is coated.
Double-checking the directions was a simple step to take but it helped.

Initially, I think I defaulted to “make a giant pancake” level of batter for some reason, whereas crepes require a very different level of batter. I think they are supposed to be thin enough to heat through from just the heat on the bottom of the pan as opposed to needing to be flipped over. I had my crepes with ricotta cheese and some preserves. They were pretty good.

I’m going to try the modifications to knee exercises talked about in this video to try to help my knee issues. I thought the video did a decent job of explaining things. I’m also still thinking about getting a rower in order to do a different sort of motion/activity that’s less stressful on knees. I’ve got my eye on this one but am waiting for the price to come down.

I want to make an inventory of the stuff in my apartment in case the worst happens and I need to make a claim on my renter’s insurance. I made a partial, incomplete inventory of the stuff in my apartment a while back using an app which has shifted to focus on business and doesn’t seem interested in individual consumers anymore (the app was Sortly). I had some data from that app in CSV format. I looked at some different apps to try that would allow me to import my data and get rolling on a new home inventory. I wound up liking this Mac App which is simply called Home Inventory.It’s pretty simple and straightforward. It’s pretty easy to add custom fields for the items in your inventory, add receipts and take pictures. The app can even send a command to a connected iPhone to open up the Camera app for picture taking without needing to install any new app on the iPhone, which I thought was pretty cool.

For now I’m just logging or completing a few entries per day, with a focus on logging higher value items first and documenting their cost with receipts. I think this will get me a decent sized log of stuff within a few weeks without taking too much time at once and getting tedious. My goal is roughly to have a mostly complete home inventory done before Election Day.

You can use Apple’s Notes app to keep track of your activities throughout the day. Here’s one way to do it:
1. In the Notes app, make a category for your daily activities by clicking on the New Folder button in the lower right and give the folder a name.

2. Make some notes with lists of stuff you’d like to do during the day. Write the category of activity on the first line (which defaults to a bigger font). Then hit the “Make a Checklist” button and make a list of stuff. 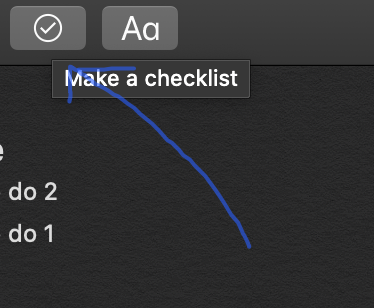 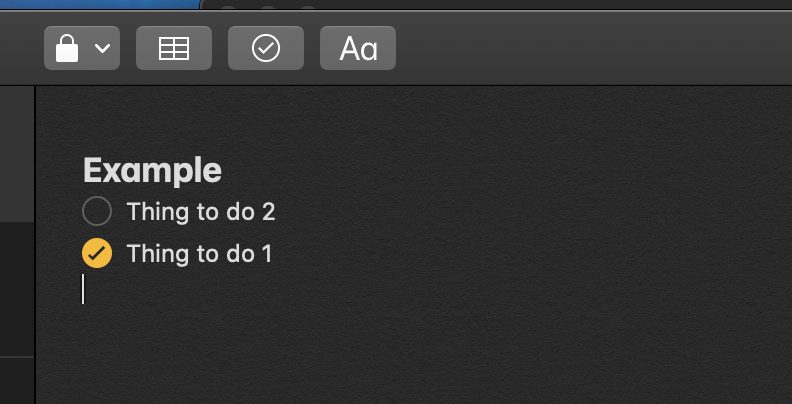 3. As you do stuff during the day, check it off from the list. If it’s a one-time thing, you can delete it after you’re done with it. If it’s a repeating thing, uncheck it when you check your list the next day, and then check it again when you complete it again.

🧠 🌩 Brainstorming: Things I Can Do to Get More Organized and Less Cluttered (Digitally and Physically)