Peikoff’s Guidelines for Subordination (from Lecture 2)

Note that if I say Peikoff agrees, that means he agrees about the basic nature of the error, and not necessarily every detail of my analysis or rewrites.

Note that my trees should be clickable now.

There are thousands of boys with college educations that are out of work. (F&S)

My answer: this parallels the “He put the ring on her finger with a smile that he had bought at Tiffany’s” example where “that he had bought at Tiffany’s” appears to possibly modify “smile.” So I guess it’d be a misplaced adjective clause, with the adjective clause being “that are out of work” and the problem that it apparently potentially modifies “college educations.” I think this sort of error is hard for me to detect by default – were I not consciously looking for it due to having just gone through a lecture that included a similar example, I’m not sure that I would see it. The reason for this is that I think I do lots of automatic cleanup for readability and “reasonable” interpretation when I read this kind of thing. It’s like how I often don’t see typos unless I’m doing TTS (or unless the typo is glaringly “obvious”.)

To correct the error here, I’d change the prepositional phrase “with college educations” into an adjective. E.g. There are thousands of college-educated boys that are out of work. That way there is nothing in between the adjective clause that are out of work and the thing it is modifying.

Now, like the twenties, inflation is a real danger.

My answer: I think the sentence wants to express something like “Inflation is a real danger now, as it was in the twenties.” The “like the twenties” phrase is awkwardly placed though and could be read as maybe saying now is like the twenties in some unspecified way and then following that up with what seems like almost a non-sequitur about inflation being a real danger.

“Now” is not like “twenties”. “Now” is the time you’re in now. And twenties is the time you’re in then. So the real parallel in your thought is now versus in the twenties. In other words, what part of speech is “now”? And what type of function does “in the twenties” have? It’s also a time specifier so it is an adverb. So your relationship here is between two adverbs. The “in” is implied. “Like” only as a preposition can govern a noun and pronoun, prepositions can only govern nouns or pronouns, you can’t say, “in now”, and therefore you really are implying “now, as was true in the twenties”. See that? Consequently, you have to say “as in”, and you can leave “was true” to implication. In other words, “like” has to govern a noun or a pronoun, and although the word “twenties” is a noun, in this sentence it is functioning as part of an implied adverbial phrase “in the twenties.”

Note: the Oxford Learner’s dictionary has the following note re: like and as: 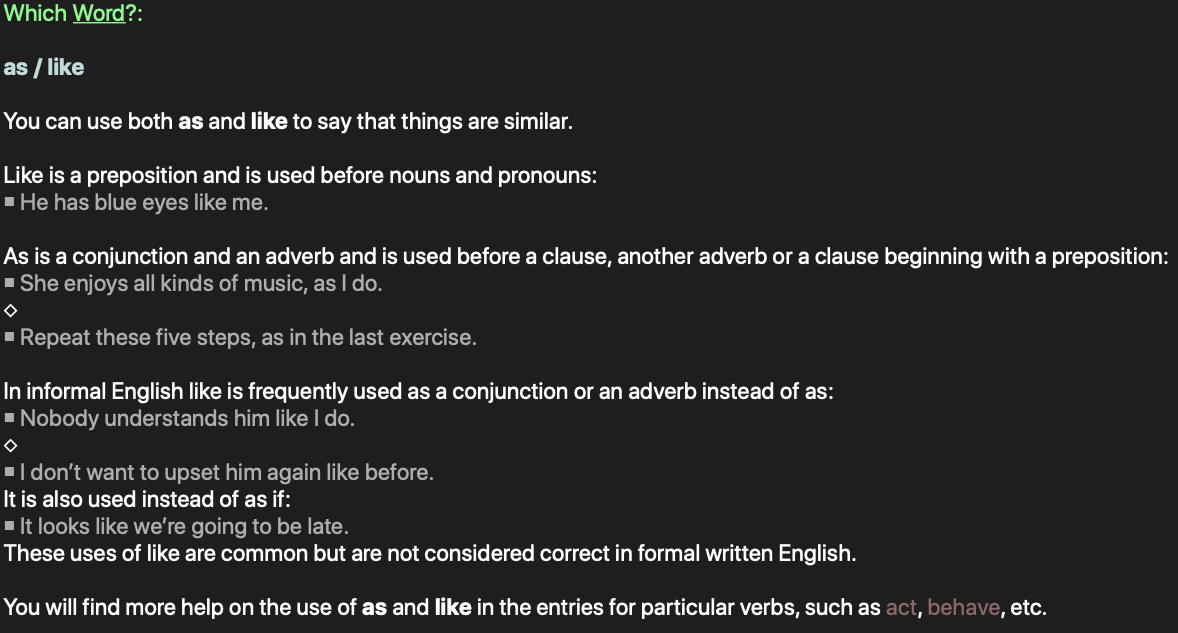 I also found this page on the topic which had a couple of useful sample problems.

As he predicted the enslavement and destruction of mankind, the President took a sip of water.

My answer: I think there is an error, but how the error is best characterized depends on how you read the sentence grammatically.

OTOH suppose you view “as” more like a conjunction between two clauses of equal grammatical status. There is still an error in that reading, for most writing contexts. The error is that two things which are very dissimilar in importance are being given equal structural “weight” or emphasis. The enslavement and destruction of mankind is much more important than sipping water, and so they should not be treated equally in terms of how you structure the sentence.

Under either view we can say that the reader’s expectations are being violated in terms of how the sentence is structured. For lots of standard contexts/writing goals, this would be bad. However, if the writing is satirical or funny, then it would be okay, because in that context, you actually may want to violate the reader’s expectations on purpose. (Peikoff makes this point with a different example – he mentions the possibility of the water being laced with germs of some kind). 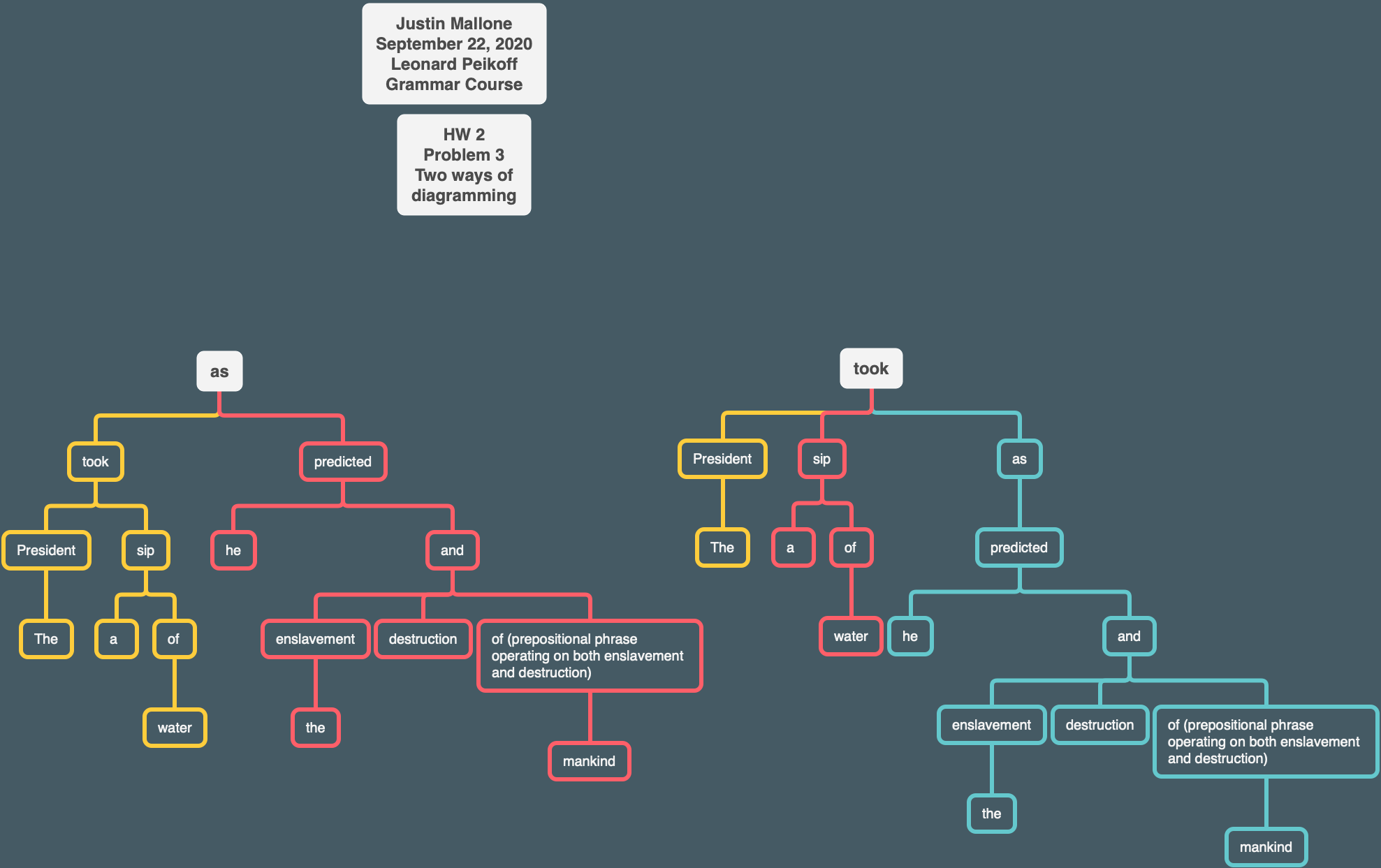 A debate is where two people argue back and forth.

My answer: this is similar to the The reason I failed was because I didn’t study. sentence from the lesson. where two people argue back and forth wants to tell us something about the location of some action, but the verb we have is is. So we actually need something to link to on the other side like a noun (and I had trouble making an adjective work here so I do think it needs to be a noun though I’m not 100% sure why).

One possible rewrite: A debate is a situation where two people argue back and forth.

More aggressive rewrite: Debates involve people arguing back and forth.

I had been standing idly on the corner for an hour when an explosion that killed hundreds of men occurred.

My answer: Maybe another example of putting the main event in the subordinate clause.

Rewrite: An explosion that killed hundreds of men occurred after I had been standing idly on the corner for an hour.

Peikoff agrees. He liked the following rewrite from a student:

After I’d been standing idly on the corner for an hour, an explosion killed hundreds of men.

He liked this because it gives the emphasis to the explosion killing hundreds of men over the explosion occurring. It sounds like he hadn’t intended the emphasis on the occurring as a problematic issue when he wrote the question but that he was happy someone noticed it.

It was raining in the morning, while it cleared up later.

My answer: wrong conjunction. You want to indicate a contrast here (a change in weather) so you should use something like “but” instead of “while”.

Peikoff agrees. He also mentions you could use “although” if you wanted a subordinating conjunction.

Last Tuesday, an event occurred in my life that I shall always remember.

As Aristotle before him, Aquinas was a champion of logic.

My answer: Incorrect usage of “as” per Peikoff’s discussion of like vs. as. We want either Like Aristotle before him or alternatively As Aristotle was before him, though that latter one might make more sense if placed after the other clause rather than before.

Peikoff agrees. There’s no clause in the “As” word grouping, so nothing to justify “As”.

My answer: I think the “while” is the problem. You want to indicate a contrast here, not a temporal relationship (and indeed in Lincoln’s original Gettysburg Address there is a “but” used where the “while” is here.)

Peikoff had another problem in mind, namely the issue of turning the “they did things” into a subordinate clause (from the original) which changes the focus into being on what people are saying.

The world will little note, nor long remember what we say here, but it can never forget what they did here.

A psychological session which was the turning point in her recovery from schizophrenia then began.

My answers/thoughts: (I’m pretty low confidence on this one)

Do we care that the session is beginning at some unspecified point in time? The turning point thing seems like the main idea. Rewrite: The psychological session was the turning point in her recovery from schizophrenia."

Peikoff: calls the problem reversal of subordination, basically agrees that the main idea is the turning point in recovery from schizophrenia and that the session beginning shouldn’t be getting emphasized. He likes the rewrite The psychological session which began then was the turning point.

Minor tangential/side thoughts on this problem:

He offered a proposal to repeal the Income Tax Amendment which is extremely controversial.

Peikoff: Sounds like he agreed, he was kinda brief on this one though.

He liked the books which were in the bookcase which he had bought at the auction he attended during the Fair which was held at Christmas and which held volumes which were famous in many circles which he encountered when he pursued his avocation which he enjoyed.

My answer: A damn mess!
One possible rewrite:
He liked the books on the bookcase. The bookcase was purchased at an auction during a Fair held at Christmas. It held famous volumes - famous, at least, within the many circles he encountered when pursuing his enjoyable avocation.

Most of our trouble is because we think too little about ethics.

My answer: This is similar to the error in “The reason I failed was because I didn’t study.”. We don’t want an adverb clause here. Rewrite:
Most of our trouble is the result of a lack of thinking about ethics.

I thought about my problems a great deal, finally concluding that I am basically worthless. 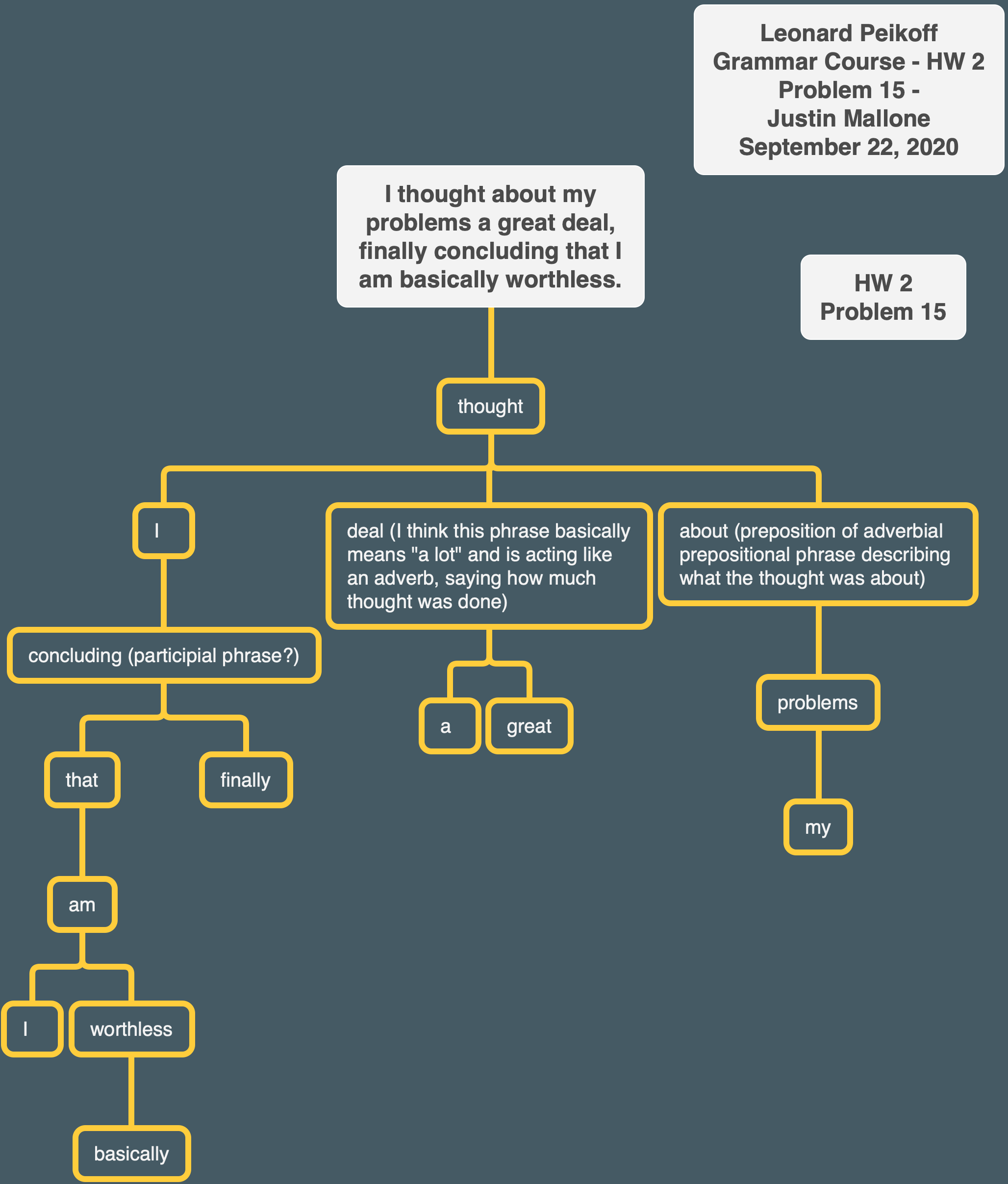 Peikoff: Calls this reversal of subordination, suggests After thinking about my problems a great deal, I finally reached a conclusion: I am worthless.

Combine the following into a unified sentence, with appropriate subordination:
English is a difficult language. The homework in this course takes too much time. Grammar is worth studying. The teacher goes too fast. Subordination in English is especially difficult.

Asingle unified sentence? Uh ok…
Despite English being a difficult language, the homework in this course taking too much time, the teacher going too fast, and subordination in English being especially difficult, grammar is nonetheless worth studying.
IRL that’s too long though.
Sounds like Peikoff will go over this in next lecture.