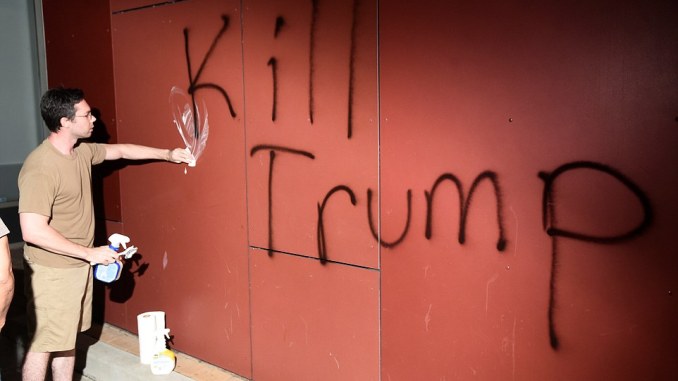 The modern Left’s narrative is that they are standing up to violence, racism, sexism, and hate.

In fact, the modern Left is the primary instigator of violence, racism, sexism, and hate in America.

The left’s demonization of Donald Trump as the next Hitler (when he is, in fact, a moderate) has created an awful cultural environment. In that environment, many people think it’s fine to engage in violence, threats of violence, intimidation, and hate directed at Trump, his voters, the GOP, and even innocent children. In that environment, people seeking to advance a political agenda or even just get attention feel free to flagrantly lie about being attacked by evil Trump supporters. In that environment, rich celebrities condemn white people — and especially white women — as a group over a political disagreement.

This is all fucked up.

Below I provide evidence, with a focus on violence, threats, lies, and racism that have occurred in response to President-elect Donald Trump’s presidential campaign.

Comment below if you know more examples. I’ll be updating this for a while.

VANDALISM: Anti-Trump Vandalism and Fire in Florida
Note: link no longer works and was excluded from Archive.org’s Wayback Machine :\

VIOLENCE: Female anti-bullying ambassador, 23, arrested at Trump Tower protest for pushing man, 74, to the ground in fight over the new President-elect

VIOLENCE: Collection of Many Violent Acts During Oakland Protest Courtesy of Pamela Geller

THREAT: Anti-Trump Protester Says “People Have to Die” on CNN

Hoaxes and Suspected Hoaxes by Anti-Trumpers

CNN’s Van Jones: This Election Was A ‘Whitelash’

One thought on “The Modern Left’s Anti-Trump Violence & Hate”